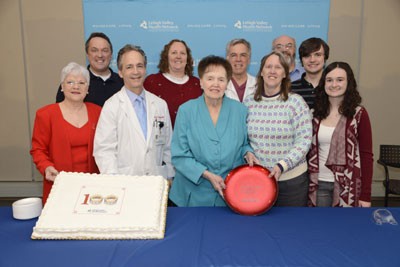 A bit groggy after undergoing a heart procedure at Lehigh Valley Health Network (LVHN), 90-year-old Mary Longo of Hazleton was still able to recite the quadratic formula to prove she was OK. “I know what that is,” says Longo in her heavy Boston accent. “It’s ax2 + bx + c=0. Everyone knows that.”

A retired math professor who taught at Penn State Hazleton and King’s College in Wilkes-Barre, Longo has long suffered from aortic valve stenosis. The disease caused her to experience chest pains, dizzy spells and shortness of breath, especially when walking up stairs. Open-heart surgery to replace the valve was deemed too risky. However, Longo was a perfect candidate for transcatheter aortic valve replacement (TAVR). On Feb. 5, 2014, she became the 100th patient to receive TAVR at LVHN.

Today, Longo (a mother of eight and grandmother of 20) and her family celebrated the milestone with her caregivers, including cardiologist J. Patrick Kleaveland, MD. Everyone who attended the celebration at Lehigh Valley Hospital-Cedar Crest enjoyed a piece of cake decorated with icing depicting the TAVR valve.

During TAVR, an aortic valve is replaced using a catheter, like those used to open a clogged blood vessel. The catheter is inserted through a small incision in the groin. The procedure does not require the patient’s chest to be opened. The TAVR team – comprising heart and lung surgeons, cardiologists, nurses and support personnel – work together in a facility called a hybrid operating room (OR), which contains the equipment found in both a traditional OR and cardiac catheterization lab.

Since Longo’s procedure, about 10 more patients have received TAVR at LVHN. Soon, even more people will be candidates for TAVR because of LVHN’s drive to remain at the forefront of this innovative procedure. “We are one of the first hospitals in the nation that will soon begin using a new replacement valve that comes in four different sizes,” Kleaveland says. “This new technology will allow us to perform TAVR on patients who previously were not candidates for the procedure because their blood vessels and aortic valves were too large or small.”

That’s good news for people like Longo who want to return to living life without symptoms. “Now I sail up the stairs, and I’m not out of breath when I reach the top,” Longo says. With renewed energy, Longo plans to tutor students again and looks forward to driving to daily mass. She says, “I’m proof that no matter how old you are, you can improve your quality of life.”