‘Amazing’ Day for Parents of First Baby Born at LVH–Pocono 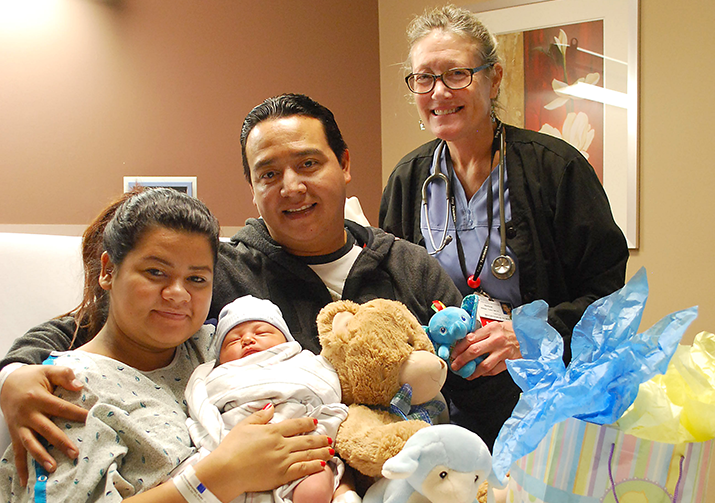 When Monroe County’s first official newborn of 2017 came into the world, Jexy Hernandez made good on a pledge made long ago.

“When my brother (Jimmy) was alive, we told each other we would name our children after each other,” says Hernandez, whose son, Jimmy Alfredo Hernandez, was delivered by wife Mery Castellon de Hernandez at 8:30 a.m. on New Year’s Day at LVH–Pocono. “I kept that promise.”

The Stroudsburg couple also honored Mery’s father, Alfredo, with their new son’s middle name. “It was a wonderful experience,” Jexy says after becoming a father for the first time. “All the staff treated us like family – anything we needed they were prepared.”

Mery was experiencing contractions when she arrived at LVH–Pocono’s labor and delivery department shortly after midnight on New Year’s Eve. Just over 32 hours later, Jimmy made Monroe County history at 9 pounds, 9 ounces and 21½ inches – a moment his parents describe as “amazing.” It was also a milestone moment for the hospital as Jimmy was the first baby born there under the LVHN brand.

Jexy and Mery, originally from El Salvador, moved to Stroudsburg in 2010. Jexy runs his own home-remodeling company, Hernandez Brothers, based in Stroudsburg. The two plan on having another child in the near future. “We will absolutely come here again for the birth of our second child,” says Jexy.

All parents who entrust the delivery of their newborns to LVH–Pocono receive a special meal compliments of Metz Culinary Management with the choice of stuffed chicken, New York strip steak, mushroom ravioli or crab-stuffed flounder and a bottle of sparkling apple cider along with other beverages, salad, soup and dessert. Parents also receive a stuffed teddy bear, blankets and – for the New Year’s first baby – an infant car seat.

‘Amazing’ Day for Parents of First Baby Born at LVH–Pocono