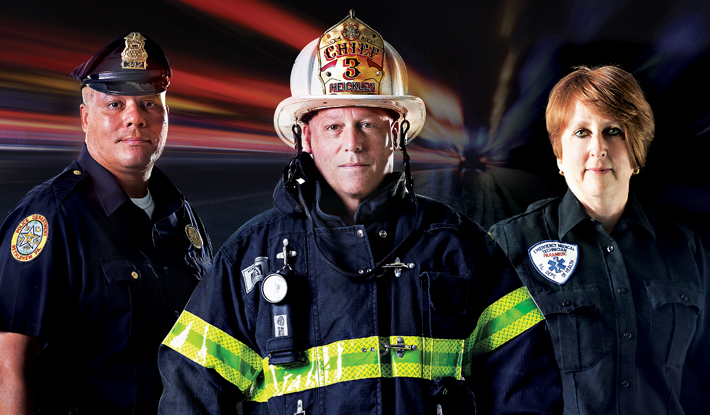 The Harrisburg Bureau of Fire was recognized with the first ever President’s Award for its resolve in overcoming multiple tragedies during the 12th annual Valley Preferred Spirit of Courage Awards Celebration held at Lehigh Valley Hospital-Muhlenberg in Bethlehem, Pa. The event recognized a dozen first responders, their departments and everyday citizens for acts of heroism or commitment to burn education.

save others from a burn or death by fire. The program also recognizes individuals and groups who have done an outstanding job promoting fire safety or burn prevention education.

Valley Preferred, a provider-led, preferred provider organization, sponsors the program to raise public awareness about burn safety and to recognize people who put others ahead of themselves. “The people we are honoring this year – first responders and ordinary citizens – demonstrate incredible bravery and the potential we all have to make a difference,” said Valley Preferred executive director Mark Wendling, MD. “These heroes exist in every community, and Valley Preferred is proud to be part of something that recognizes that.”

Burn Prevention Network executive director Dan Dillard said this event brings together first responders, health care professionals, life-safety educators and others to solve difficult and costly community challenges. It helps fund specialized training for firefighters, support programs for burn survivors and training for nearly 800,000 children every year in fire safety and burn prevention practices. “We are guided by our vision of working with partners and communities to create a world without burns,” he said.

Here are the honorees that were recognized at the event:

last November. As Jennifer Dixon and her mother Mavis were returning home from the game, they came upon a fiery car crash. They could hear people calling for help, so Jennifer kicked in the back passenger window. She and Mavis pulled the passenger out and extinguished the flames on his body with their clothes. In the meantime, Aaron Young had heard the crash from his home nearby and ran to assist. He pulled the teenage driver out, then used his sweatshirt to put out the flames. Sgt. Tingle had arrived on scene and retrieved a fire extinguisher from his car to help put the fire out. Rick Cruz, also on his way home from the game, tried to pry the back passenger door open, thinking there were more passengers in the back. Relieved that there were only two in the car, he assisted the Dixons. The driver and passenger sustained severe injuries, but if not for the bravery of these five heroes the outcome could have been very different.

Michael Surrell and his wife arrived home on West Liberty Street on a May afternoon to find smoke pouring from their neighbor’s house. People outside were yelling that a child was trapped on the second floor. Without hesitating, 64-year-old Surrell headed up the stairs, where he was met with intense heat and thick, choking smoke. Despite having a lung disease that made breathing difficult, he searched until he found the girl, scooping her up and carrying her down the stairs and out of the house. She was not breathing, so he began resuscitation efforts until she coughed and came to life. He is credited with saving the 8-year-old’s life.

When firefighters arrived at the home on Rock Street shortly after 7 p.m. last July, they found the entire back of the house engulfed in flames and the interior filled with smoke. Lt. Smith entered the home from the front and did a quick search of the living room and kitchen, while Capt. Nothstein entered from the rear. They found the victim in the kitchen and dragged him outside, where they began CPR. Despite their heroic efforts, the victim later died from severe burns and smoke inhalation.

In the early morning hours of February 2, firefighters responded to a house fire on Kittatinny Street, in the Allison Hill section of Harrisburg. They arrived to find a two-story row of apartments with significant smoke and fire coming from the front – and someone trapped inside. DeVoe and Martin ran through a wall of fire at the front door and entered the first floor apartment. They began a search in zero visibility and high heat. Martin found a victim on the sofa but fell while trying to drag him from the room. DeVoe reached them and he and Martin carried the victim back through the fire, using their bodies to shield him. Once he was in the hands of EMS, they returned to the building to search for additional victims. The man survived thanks to the courageous efforts of DeVoe and Martin.

One month after the Kittatinny Street fire, Harrisburg Bureau of Fire lost another respected member, firefighter Daniel Wolfe, to cancer. As family and firefighters gathered to pay their last respects on a cold, windy night, calls came in for a fully involved house fire on Lexington Street with multiple children trapped upstairs. When crews arrived they found fire and heavy smoke coming from the first floor and smoke pouring from the upper floors. The situation necessitated additional alarms and a call for off-duty firefighters. As the funeral service for Wolfe ended, members of Harrisburg Bureau of Fire mobilized to assist at the scene of the fire. As DeVoe was on his way to his station to retrieve his gear, his car was struck by a motorist driving a stolen vehicle. DeVoe was critically injured and died the next day.

Five people were rescued from the Lexington Street fire. Two of the children, ages 2 and 10, later died. The fire, caused by a hover board, took an enormous toll on the members of Harrisburg Bureau of Fire. DeVoe was a respected leader and role model both within and outside the department. He was always an example of service and generosity, even in death, when he helped others by donating his organs. His donation directly saved five lives and assisted as many as 100 additional people through tissue donation. His was the first line-of-duty death since 1979.

The President’s Award is presented to the Harrisburg Bureau of Fire in recognition of their ongoing efforts to do the work that DeVoe would want them to do despite their devastating losses.

Santo Piccolomini was on the job installing a sign on a building near high-voltage power lines. In a split second, the electricity arced and sent 13,000 volts surging through his body.

He spent almost two months in a trauma burn unit in western Pennsylvania and underwent 19 surgeries to save his arms and maintain movement in his left shoulder. He fought through many hours of physical therapy and at age 21, came to fully appreciate the value of life and those who had supported him. Even before a full recovery, Piccolomini wanted to give back by volunteering at Camp Susquehanna. He shared his positive attitude and enthusiasm for life with the young burn survivors at camp. He left vowing to help support Camp Susquehanna. Few realized how fervently he worked behind the scenes to keep his promise. After months of work and countless hours, Piccolomini raised $8,500 – more than any single counselor ever. His passion for helping young burn survivors has led him to rally others to support the burn survivor community. He has been able to turn his personal experience into a springboard that makes an impact at home and in the world.