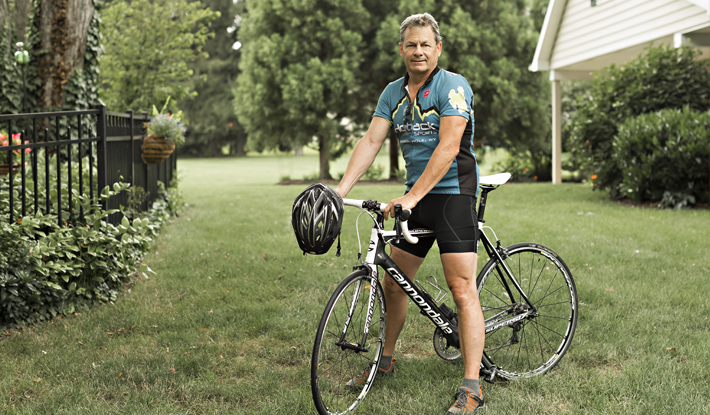 Some people stand on protocol. Bill Vandegrift of Doylestown lives by it: Two protocols helped him survive colon-rectal cancer and thrive after treatment.

First, he got a recommended colonoscopy in his 50s, when risk for precancerous colon growths called polyps becomes higher. In fact, the procedure revealed polyps in Vandegrift’s colon. Because they were present, his doctor recommended getting another colonoscopy five years later. This time, the colonoscopy found a cancerous growth.

“I had no signs, no medical issues, no bleeding – nothing,” Vandegrift says. He immediately scheduled surgery to have a section of his colon removed. “The key to a good outcome with any cancer is to identify and stage it early,” says colon-rectal surgeon Robert Sinnott, DO, with Colon-Rectal Surgery Associates, PC. “Most colon cancers are slow-growing, but some can accelerate quickly in younger patients.”

“Before surgery, I was told what I would need, what to expect, what I would or wouldn’t be able to do afterward, and how soon I’d go home,” Vandegrift says. “I had a very clear sense of what I was going through.” ERAS was initiated in 2015, and Vandegrift was one of the first to benefit from it.

“One key aspect of the protocol is making sure patients get out of bed quickly after surgery, which helps bowel function and shortens hospital stays,” says nurse practitioner Justina Momah, CRNP, with Lehigh Valley Hospital–Enhanced Recovery After Surgery. “With ERAS, we’ve been able to let people go home after three days instead of six.”

That was important to Vandegrift, who enjoys an active lifestyle and was champing at the bit to leave. “I was walking laps around the hospital halls, feeling really good,” he says. After his release, Momah called him every day for a week and then every other day for a second week. “We’d talk for 10 or 15 minutes about how it was going,” Vandegrift says. “She gave me answers to any questions I had.”

Because he caught his cancer at an early stage before it had spread, Vandegrift didn’t need chemotherapy or further treatment. “Three weeks after surgery I didn’t have any restrictions,” he says. “We got it quick, and I was able to move on.”

LVHN to Begin Vaccinating Children Ages 12-15 With the Pfizer Vaccine on May 13
Hazleton Area Student's Video Wins $10K for School
Grace for Today
LVHN to Offer No-Appointment Drive-Through COVID Vaccinations at Dorney Park on May 12
Ground Broken for LVHN Sports Performance Center at Schuylkill Haven Area School District
There’s little room for skepticism with COVID-19 vaccine, our lives are on the line