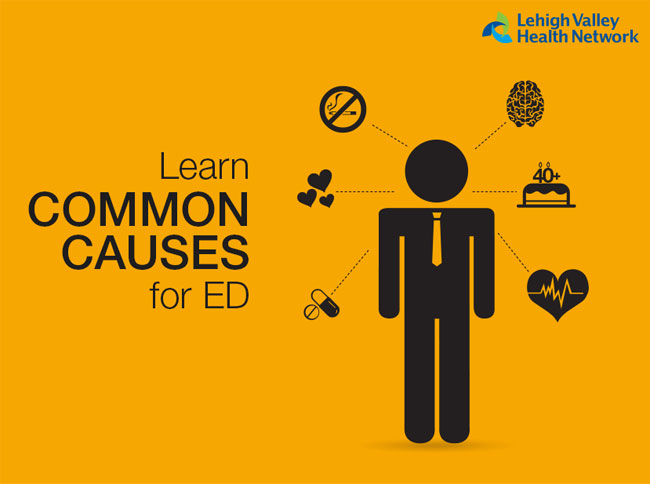 If you watch television, you’ve seen the commercials. They typically start with an older couple who are enjoying life, while a commentator discusses erectile dysfunction (ED) – and the latest medication to correct it. You figure every guy with the problem must be talking to his doctor, making a trip to the pharmacy and returning to a healthy sex life.

Yet studies show a majority of men aren’t seeing their doctor about ED. The Havana Day Dreamers Foundation, an organization that promotes men’s health, funded a study that examined the medical records of more than 6 million American men with an ED diagnosis over the course of a year. Only 25 percent of those men actually filled prescriptions for an ED drug.

“Men often feel embarrassed or believe something is wrong with them,” says Lehigh Valley Health Network (LVHN) urologist Clifford Georges, MD, with LVPG Urology. “The fact is, ED is much like high blood pressure or cholesterol in that it may reflect other potentially serious health issues.”

A urologist such as Georges can help you start the conversation, and can determine whether or not an ED drug is appropriate for you.

“ED often is caused by poor blood flow, so many men with ED have underlying vascular issues,” Georges says. “Studies show men with ED are more than twice as likely to have a major cardiovascular event. On average, it takes three years after the onset of ED to experience such an event.”

The National Institutes of Health estimates that some level of ED affects as many as 30 million men in the U.S. each year. Incidence increases with age. About 4 percent of men in their 50s and nearly 17 percent of men in their 60s experience a total inability to achieve an erection. The incidence jumps to 47 percent for men older than 75. But ED is not an inevitable part of aging. ED is treatable at any age.

According to the Journal of the American Medical Association, the most common causes of male sexual dysfunction include:

If you’re experiencing ED, you should speak with your primary care physician as soon as possible. “Starting the conversation is the first way to get help,” Georges says.