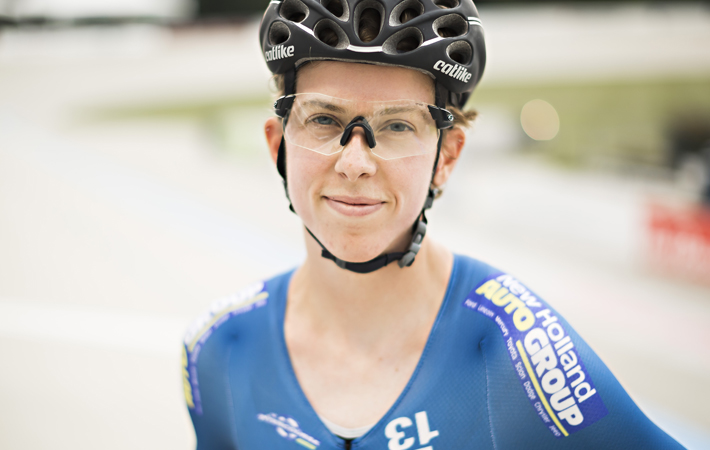 When she’s on the track at the Valley Preferred Cycling Center (VPCC), Kim Geist is always pushing. “Cycling is an endurance sport,” says Geist, 29, of Emmaus. “When you’re training, you are thrashing every day and working through the pain.”

That strength helped Geist in an unexpected way. She was just about to begin track training in a bid for a spot on the 2008 Olympic team when, while riding her bike on a road near her home, she was struck by a tractor trailer. The accident left her with severe injuries – broken ribs and vertebrae along with a fractured pelvis and sacrum.

Geist did not need orthopedic surgery after her accident, but Lehigh Valley Health Network (LVHN) orthopedic surgeon Neal Stansbury, MD, with LVPG Orthopedics, an elite-level cyclist, oversaw her recovery both at Lehigh Valley Hospital–Cedar Crest and through months of rehabilitation. “It was important to rebuild strength in Kim’s lower body and to help her regain full range of motion,” Stansbury says.

After an accident like Geist’s, it’s common for the muscles around the hips and pelvis to get tight during recovery, impairing function. So strengthening all lower-body muscles became vital to her recovery. “Those muscles help to maintain Kim’s position on the bike and give her full force with pedal strokes,” says Stansbury’s colleague, LVHN orthopedic surgeon Mitchell Cooper, MD, who also is a recreational cyclist.

When it came to therapy, Geist treated it the same way she treated training. “I attacked it,” she says. “I’m competitive, and I wanted to ‘win’ physical therapy.”

“Winning” meant not only getting back on her bike, but also tackling everyday activities, such as getting into a bathtub or being able to walk to class. (At the time of her accident, Geist was an undergraduate student at DeSales University.)

“It was such a traumatic event that I was happy to be alive and to be working toward those everyday things,” she says. “At first, riding a bike was far in the back of my mind.”

During rehab Geist recalls starting out by warming up on a bike. Then she lifted weights “to build strength in my lower body and make sure I had strength and full range of motion around my pelvis,” she says.

It wasn’t easy, and it was uncomfortable. But as an athlete, Geist knew she would get out of rehab as much as she put into it.

Back on her bike

Because she was in such good physical shape before her accident, Geist recovered quicker than anyone expected. By December 2007 – four months after her accident – she was back on a bicycle outdoors. “That was the icing on the cake,” she says. “Even though it was freezing out, I could ride again.”

By March she returned to competitive cycling, and the following October Geist was back to the fitness and training level she had achieved before the accident.

Since her return to the track, she’s earned medals. Geist won a bronze at the 2015 UCI Track World Championships, an international racing event. She also was a finalist for the 2016 Rio Olympic Games (but all spots went to incumbents).

This summer, you can catch her riding competitively at the VPCC’s World Series of Cycling. She’s set to take part in the 2016 USA Cycling Elite Track Nationals there in late July. In addition, she has an undergraduate in sports and exercise science from DeSales, and now holds a master’s degree in sports nutrition. She uses her experience to coach other cyclists (including 20 at the VPCC) and to teach them proper nutrition.

Through it all, Geist’s strength has persevered. “Getting run over by a truck doesn’t sound like something you’d recover from,” she says. “But people who knew me and my mentality knew I would come back as quickly as possible. I never doubted myself.”