Everything You Ever Wanted to Know About the Flu Shot, Answered 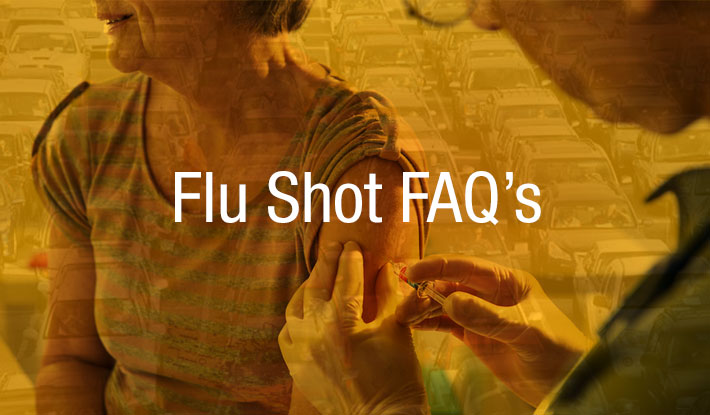 The flu season is in its very early stages and millions of Americans are making sure they’re as protected as possible with a flu shot. Every year, Lehigh Valley Health Network makes getting a flu shot more convenient for area residents by administering free seasonal flu vaccinations for adults and children six months and older. This year, LVHN will hold two community drive-thru sessions – at Dorney Park on Saturday, Nov. 4 and at Coca-Cola Park in Allentown on Sunday, Nov. 5 from 9 a.m. to 3 p.m. each day.

Still, plenty of people have concerns about getting a flu shot so we took the opportunity to address some of the more common questions with Terry Burger, LVHN’s Director of Infection Control.

Q: How are flu vaccines determined?

Burger: Scientists and vaccine manufacturers study what is circulating regarding the flu virus in the southern hemisphere because it’s a season ahead of us. Determinations are then made as to what to put in this year’s vaccine. It’s created by injecting the viruses into fertilized hen’s eggs, which are then incubated for several days. Fluid containing the viruses is taken from the eggs and the viruses are inactivated, or killed. From there, the virus antigen is purified to make the vaccine for injected flu shots. The nasal spray vaccine is slightly different, using weakened viruses. The antigen is what stimulates your immune system to create antibodies to protect you from the flu virus. Flu shot protection lasts about a year, and the vaccine is formulated each year because the circulating virus strain may change each year.

The Centers for Disease Control and Prevention conducts studies each year to determine how well the flu vaccine protects against flu illness. While vaccine effectiveness can vary, recent studies show vaccine reduces the risk of flu illness by 50 to 60 percent among the overall population during seasons when most circulating flu viruses are like the vaccine viruses.

Vaccine effectiveness also can vary depending on who is being vaccinated. At least two factors play an important role in determining the likelihood that flu vaccine will protect a person from flu illness:

Q: What types of vaccines are available?

Burger: LVHN offers two types of vaccine at the community drive-thru campaigns. One is a standard dose for people six months of age to 64. The other is the high-dose vaccine for people 65 and older. Some people are concerned with the thought of a higher dose, but the purpose of the high-dose vaccine is to assist in stimulating the immune system of someone whose system may not function as well as when they were younger.

Q: What about the nasal spray vaccine?

Burger: We’ve never offered the nasal spray vaccine (Live Attenuated Intranasal Vaccine 4) at the drive-thru clinics and this year LVHN as a network is not offering the nasal spray at all, following the recommendation of the Centers for Disease Control and Prevention (CDC). In light of low effectiveness against influenza A (H1N1) in the U.S. during the 2013-14 and 2015-16 seasons, the CDC makes the interim recommendation that LAIV4 should not be used for the 2016-17 season.

Q: Does everyone really need to get a flu shot?

Burger: In the past, flu vaccine was primarily targeted toward high-risk groups. That was before the MARTIN Flu Foundation started advocating for everyone to get a flu shot. Martin McGowan was a healthy 15-year-old who in 2005 came home from baseball practice and developed severe flu symptoms. His parents rushed him to the emergency room and he eventually passed away from several complications caused by the virus just 24 hours after his initial symptoms. Martin had not been vaccinated. His family developed a nonprofit to stress the importance of flu vaccinations for everyone 6 months old and up. The McGowans have been very influential lobbying health care agencies around the country, including the CDC. LVHN has joined in their effort.

Q: Are there any people who should avoid getting a flu shot?

Burger: People who have severe allergies to a component within the vaccine or to eggs, as the vaccines use the egg-based manufacturing process we described earlier. We won’t give the vaccine at the drive-thru to anyone with such an allergy. They should consult with their primary care physicians or an allergist to find out if there is a vaccine that can be given more safely in a controlled enviroment. Individuals who have had a severe reaction to a flu shot in the past or a history of Guillain-Barre syndrome (a condition in which the immune system attacks the nerves) should be evaluated by a physician before getting a flu shot.

Q: Are there any side effects from a flu shot?

Burger: You might get an achy arm for a time, perhaps some redness in the injection area and maybe even a low-grade fever in isolated cases. Normally, they’re all short-term effects. If the area becomes itchy or if hives develop, these would not be considered normal reactions and you should see a physician. More extreme reactions – some throat constriction or shortness of breath and dizziness for example – which would require an emergency room visit. But these abnormal reactions are rare. Actually, an achy arm means your body is reacting to the antigen and developing antibodies to help protect you from the flu virus. Some tips to help you from getting a sore arm include:

Q: Finally, the most common question – can a flu shot cause the flu?

Burger: A flu shot can’t cause the flu. As we’ve pointed out, vaccine in flu shots used inactivated, or killed viruses. The nasal spray uses activated, but weakened, viruses. Now remember, it generally takes about two weeks for the flu vaccine to work. Therefore if you develop upper respiratory-type symptoms following the flu shot, you had already been exposed. People frequently confuse a cold and the flu because there are some similarities in how they make you feel.

Symptoms of the flu can include fever or feeling feverish chills, cough, sore throat, runny or stuff nose, muscle or body aches, headaches and fatigue. Cold symptoms usually are milder than symptoms of the flu. People with colds are more likely to have a runny or stuffy nose. Colds generally do not result in serious health problems.

Flu vaccination is an important preventative tool for people with chronic health conditions:

Protect yourself and your loved ones by getting a flu shot and registering to attend one of our upcoming flu clinics.

Everything You Ever Wanted to Know About the Flu Shot, Answered