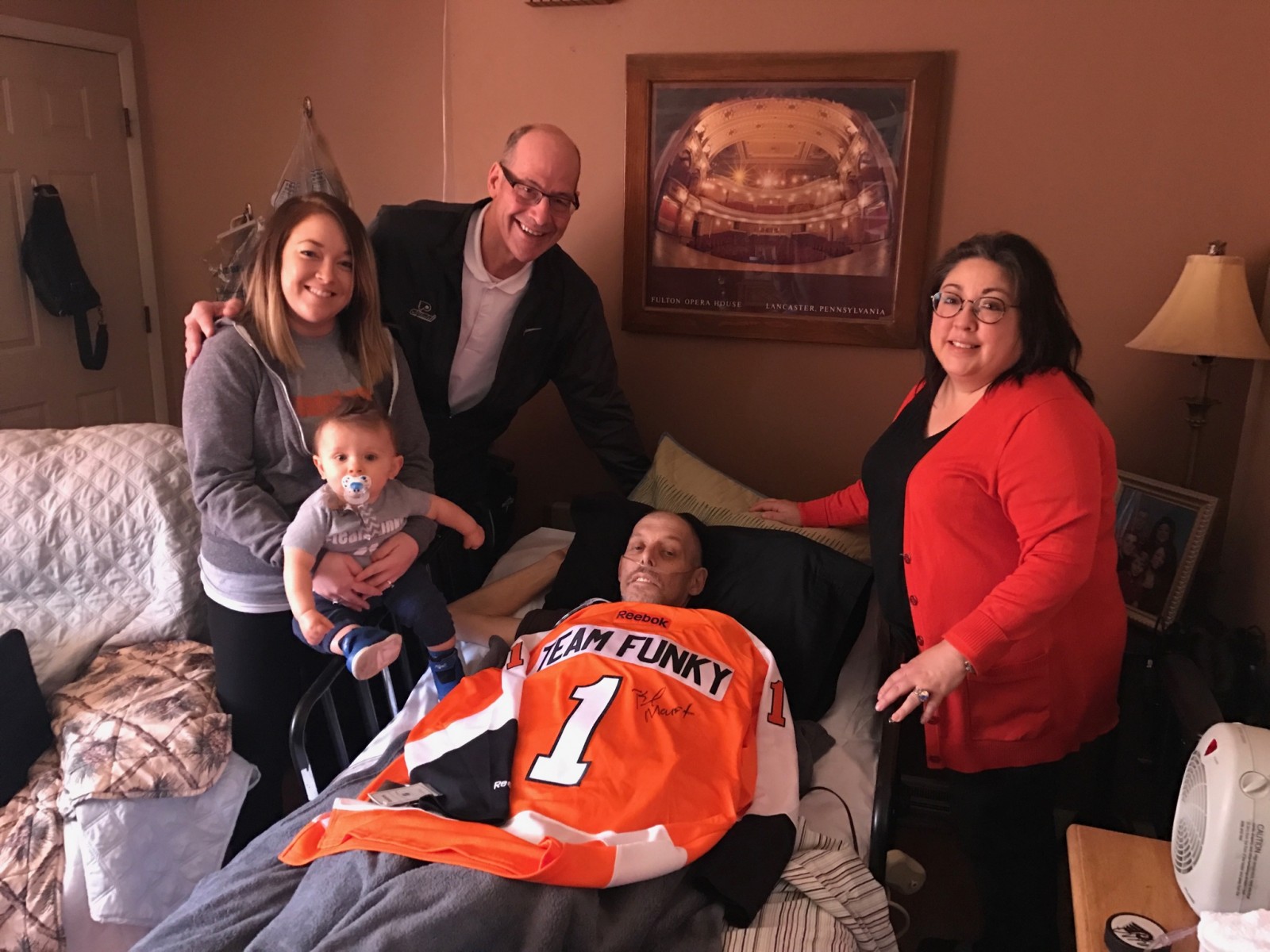 When LVHN clinical oncology social worker Kim Bruns first met Fleetwood resident Michael Funk and his family more than a year ago, she recalls his “discouraged outlook on life regarding his cancer prognosis but also his passion for the Philadelphia Flyers hockey team.” At that time, Funk had just begun cancer support therapy with Bruns.

Michael’s wife Frances says that through this journey she and her husband have found that unlikely connections can make the most profound difference. “Over a year ago we sat in a waiting room determined to get an appointment. Cancer can be haunting and dark and we knew we needed help to find joyfulness again. Kim’s work helped Michael climb out of the darkness. Kim brought him back to me and I am blessed and appreciative that we were willing to accept help when the journey became too heavy for us,” Frances says.

Funk, now 59, has been fighting a difficult battle with stage 4 lung cancer for the past two years. Recently he transitioned to hospice home care. When Bruns learned of the transition, she wanted to help fulfill some of Funk’s final wishes in cooperation with the hospice team. Although a trip to see a Philadelphia Flyers game in person was not possible, Bruns reached out to the Flyers’ organization to see what might be feasible.

“The team offered to send a care package to Michael containing autographed items of some of his favorite players,” Bruns says. In addition, oncologist, Nicole Agostino, DO, with LVPG Hematology Oncology, had a connection with the Flyers organization. Through that connection Bruns also arranged for a retired Flyers Hero to visit.

That player turned out to be retired defenseman, Brad Marsh, a fan favorite who played with the Flyers from 1981 to 1988. For 1984-85, Marsh received the Yanick Dupre Memorial Class Guy Award presented by the Philadelphia Hockey Writers Association, honoring a Flyers’ player who “best illustrates character, dignity and respect for the sport both on and off the ice.”

To fulfill Funk’s wish, Marsh drove from New Jersey to the Funk family’s home. “Brad spent an hour-and-a-half with Michael and Frances, as well as Michael’s daughter, baby grandson, a friend and myself. He brought shirts, books and cards which he autographed for everyone,” Bruns says.

It’s a visit that Frances says was like a reunion. “When Brad entered our home Michael said, ‘Hi Brad – I feel like I have known you all my life.’ They made an immediate connection and chatted as if they were friends for a lifetime. Michael is a big fan of the whole package. He loves the rush of entering an arena with the cool air hitting his face, the excitement of racing ice blades on the ice and the clashing sounds of hockey sticks. Both Michael and Brad talked ‘Flyers Hockey’ and their conversation reminded them of when they were young,” she says.

Marsh invited Michael to the Philadelphia Flyers vs. Pittsburgh Penguins Alumni game, but since Michael was unable to travel, Marsh hosted #teamfunky at the game. “#teamfunky consists of family and friends who continue to take this journey with Mike,” Frances says. “For one night, they experienced Michael’s love for hockey. The excitement of a fan can be contagious and they too will experience all that is good.”

The transition to hospice was a turning point in Michael’s journey, but even still, the Funks are living a fulfilling life. “Kim’s determination to provide this gift reminded us that Michael is living life with hospice. We are also so humbled that Nicole Agostino, DO, assisted in making this happen. Brad’s visit has made a profound impact on us reminding us of everything that is good,” she says.

Bruns says this experience has been fulfilling to her, too. “Typically, my relationships with patients end when they transition to hospice. However when a family requests that I stay involved with a patient, I will work collaboratively with the hospice team. In this case, it’s been great to help create a wonderful memory for people like Michael and his family.”