From Heart Surgery to Half-Marathons 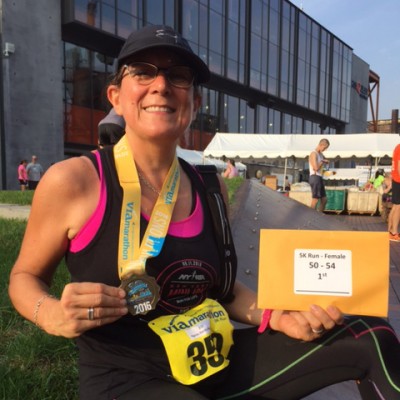 Agnes Hardy-Boyer loves to run. From a 20-kilometer race along the northwest coast of France to a 5K run in the Lehigh Valley Health Network (LVHN) Via Marathon, to this weekend’s Run and Ride half-marathon at Dorney Park, Hardy-Boyer enjoys setting new personal bests. But exercise wasn’t always easy for the 50-year-old Easton woman.

In 2013, Hardy-Boyer was alarmed at how quickly her stamina and strength were sapped during activities like biking or squash. “I became tired and out of breath,” says the deputy director at Sanofi Pasteur in Swiftwater, Pa. Tests for heart disease and Lyme disease were negative. The unexplained fatigue was unrelenting, even during light exercise.

The heart of the problem

Her primary care physician sent her to a cardiologist, who suspected hypertrophic cardiomyopathy (HCM), a sometimes fatal thickening of the heart muscle. HCM is linked to sudden cardiac arrest in athletes.

In late 2013, she came to Lehigh Valley Health Network for an appointment with sports cardiologist Matthew Martinez, MD. Instead of HCM, Martinez found a flap of tissue beneath her aortic valve that was restricting blood flow out of her heart, causing her troubling symptoms. This ‘subaortic membrane’ is most commonly found in children and is often repaired with surgery, though it sometimes requires a replacement for the aortic valve.

Going from surgery to boundless energy

Martinez’s colleague, LVHN heart surgeon James Wu, MD, operated on Hardy-Boyer in May 2014 to remove the membrane. This cleared the passage for blood flow out of her aortic valve – no valve replacement needed.

Soon after, she was exercising again without the excessive fatigue that had plagued her. As her energy surged, she took up running − a sport she had avoided for years. “I didn’t like running the hills at first, but soon I was finding them easier,” she says.

Today, Hardy-Boyer goes to the gym three times a week and runs in races as often as she can, estimating she has completed a dozen events since her surgery. “I feel amazing,” she says. “I can do anything I want without being tired, thanks to Drs. Martinez and Wu.”

From Heart Surgery to Half-Marathons