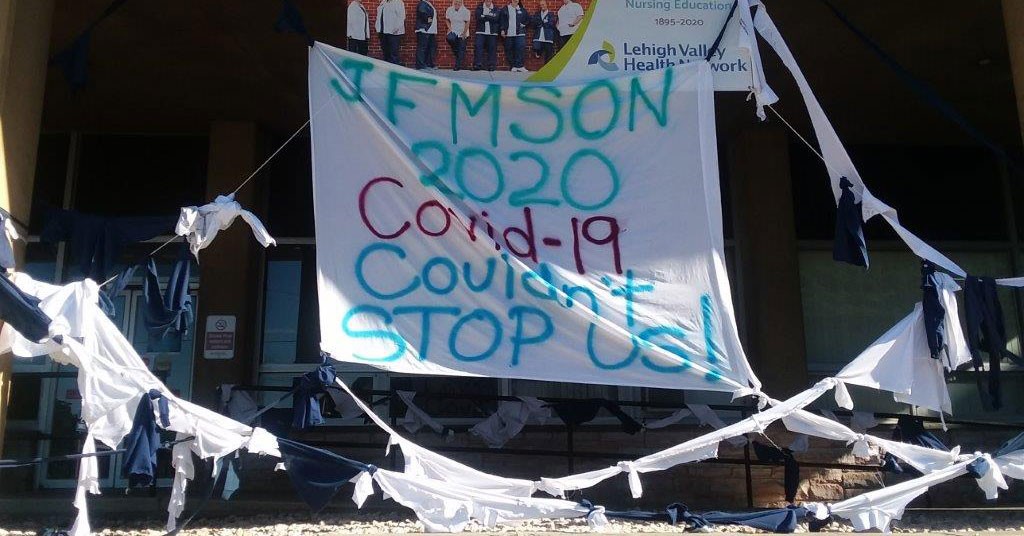 Graduate Nurses Say Goodbye to the Classroom and Student Uniforms.

It’s the time of year when shredded nursing school uniforms hang in front of the Joseph F. McCloskey School of Nursing at LVHN. “It’s a rite of passage, a tradition, not only for our students, but for many nursing programs,” says Lynne Hausman, MSN, director of the school.

Many former graduates, staff nurses, hospital colleagues and local residents reminisce that they always know it is graduation season seeing the uniforms hang from the School of Nursing.

To make sure the tradition continued this year, instead of having students and instructors together shred uniforms on the last day of clinical rotation, students did the shredding on their own. A few students then collected the uniforms to take to the School of Nursing where they practiced appropriate safety measures to hang them up.

The tradition of shredding uniforms dates back as far as school itself, to the late 1890s with its first graduating class in 1898. The Joseph F. McCloskey School of Nursing at LVHN celebrated its 125th Anniversary this year. The 123rd commencement ceremony was held as a virtual event on June 11. Watch the virtual commencement celebration here.

Graduate Nurses Say Goodbye to the Classroom and Student Uniforms.