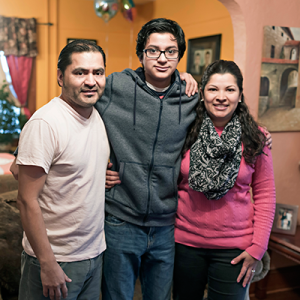 Teenagers rarely get to be heroes. But Daniel Lozano, 14, earned that honor early on Dec. 27, 2015, in his Hazleton home.

Around 4:30 a.m., the eighth-grader heard Mirian, his mother, screaming his father’s name. Francisco, 45, lay unconscious on the bed – pale, still, with no pulse.

“I told her to calm down and started CPR,” says Daniel matter-of-factly in his deep adult-sounding voice.

He jumped on the bed, clasped his hands flat in the center of his father’s chest and did a series of fast compressions. Then he locked his open mouth onto Francisco’s and blew strongly into it several times. Daniel says he recalls seeing CPR done on TV, but never had formal instructions.

He continued until the police and EMS arrived. They shocked Francisco to jumpstart his heart, then rushed him to Lehigh Valley Hospital (LVH)–Hazleton. He was shocked again in the ER, then ambulanced to LVH–Cedar Crest in Salisbury Township.

Because his heart had stopped, Francisco was chilled for 24 hours to help his brain begin to heal. A small device was implanted in Francisco’s chest and wired to his heart to restart it should it ever happen again. He made a full recovery due to the fast actions by his son and the first responders.