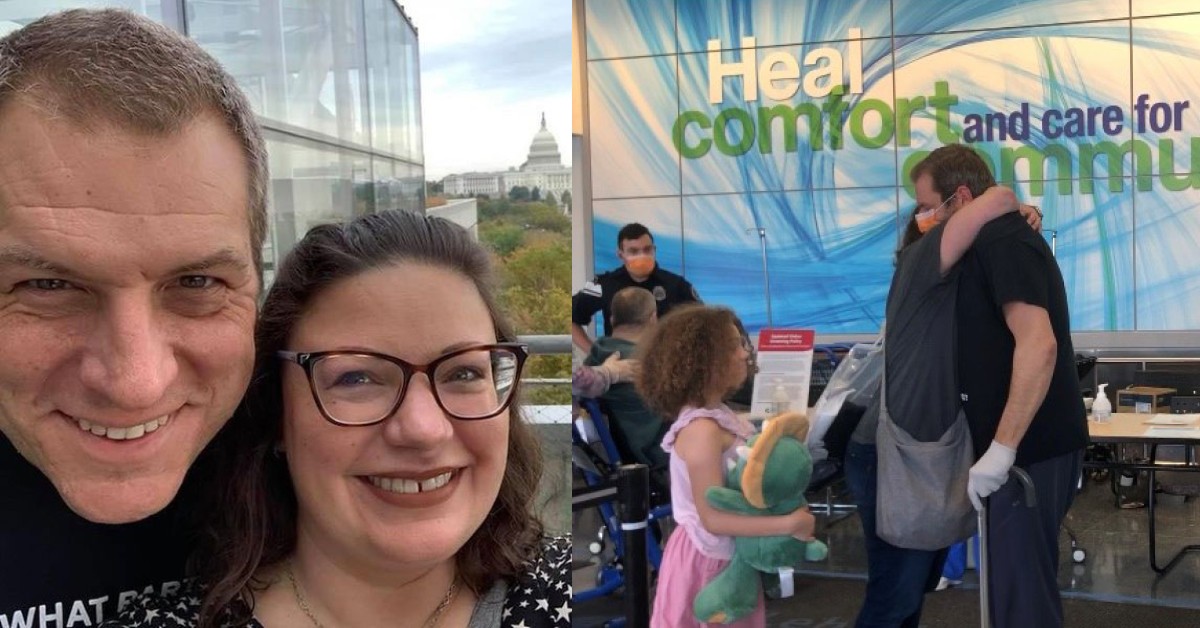 It's been close to a year since Chris McMillan, 47-year-old Bethlehem resident, was dubbed Lehigh Valley Hospital (LVH)–Muhlenberg's first extubated COVID-19 patient, early on in the pandemic. We wanted to know what life is like after COVID-19 so we reached out. Turns out, Chris was more than happy to share his experience.

What do you think when people say COVID-19 isn’t a big deal?

After more than 460 thousand deaths in this country, I cannot fathom how people think this isn’t a big deal. Even people I know who had the “light” version say they were wiped out for weeks afterward. This isn’t a game. You get one life. Staying at home, wearing a mask and social distancing when going out are not a hardship if it means that you can help keep this virus away from loved ones. It’s basic human decency.

What symptoms did you have that indicated you were sick?

I was awakened in the middle of the night (March 13) by my fiancée because I was uncontrollably shivering with a fever and, according to her, “breathing heavy and weird.” She was IMMEDIATELY on the case and made sure I was set up in our furnished basement to isolate me from her and our kids.

How did you know it wasn’t just a cold – what made it different?

After the third or fourth day of having a persistent fever that wouldn’t break (and I was taking Tylenol to keep it lower) and feeling constant exhaustion, I had a feeling this was COVID. I was weak, feverish, foggy and lightheaded. My throat hurt constantly and I had a cough. At one point after using the bathroom (we didn’t have a bathroom in the basement) I lost my balance and fell near the bottom of the stairs. It became harder to breathe. My fiancée has a friend who is a nurse who gave her a checklist of symptoms to look out for. On Sunday, March 22, I heard crackling in my chest and when I tried to breathe, it felt like I was taking sips…like my air would only come in and stop at the top of my chest.

Did you reach out to LVHN for diagnosis or testing (in person or virtual care)?

I went to get tested for the flu on March 13 because at that time they would only give people a COVID test if they first had a negative flu test. They ran the entire panel and I didn’t hear back for a couple of days. As soon as I heard I was flu-negative I went for a COVID-19 test (March 21) I didn’t receive the results of the COVID-19 test until after I was hospitalized.

How ill did you get with COVID-19? Were you hospitalized, and if so, for how long?

I checked in to LVHN (my fiancée’s recommendation…she loves you guys) on March 22. I drove myself to LVH–Muhlenberg because we had our three kids with us and we didn’t want to scare them with an ambulance or any talk of “emergencies.” I was immediately put on oxygen, and for the next couple of days, doctors made every effort to get my O2 levels up. X-rays showed double pneumonia. When the oxygen failed, they came in and told me they were putting me on a ventilator. I gave the thumbs-up (I had ZERO idea what this meant practically.) Eight days later I awoke after what seemed like an eternity of strange, otherworldly dreams. I vaguely remember being extubated…or at least dreaming my way through it. Physical therapy followed for the next couple of days. My coordination was shot. The AMAZING, EXCELLENT, COMPASSIONATE, EMPATHETIC and PATIENT staff of nurses and doctors were so kind to me. They helped me with everything from using the bathroom, learning to eat again with utensils and brush my teeth again, to finally walking. This is all while I was wildly hallucinating, and sharing what I experienced with all. (cringe…that was BAD…and embarrassing…though the staff took it all in stride and didn’t make me feel weird for it.) They are such GOOD people. On Monday, April 6, I was discharged.

Were you able to communicate with your family?

Yes! After I woke a nurse put me on Facetime with my fiancée. I learned later that the hospital staff was in communication with her on a daily basis while I was out, giving updates to my condition and assuaging her fears. When I could finally get my hands to work enough to use my phone, I texted and called home several times a day.

How did it feel to finally get discharged?

It was a relief. I wanted to get out of there (no fault of the facility, it was lovely, I just wanted to see my family.) Had a rather humorous exchange with a fantastic nurse when I “hypothetically, if I were to run how far would I get?” (at like 2 a.m., btw…as I said before, I was hallucinating a LOT) and she replied that I would topple over before I made it to the bathroom. We laughed a bit and at that point I decided that I would be good, dig into my rehab and wait until they said I could leave.

How was your day-to-day life and routine affected while you were sick with COVID-19?

Well, before heading to the hospital, I stayed in the basement and watched a LOT of television. I had to drop out of school for the semester (I attend Arizona State University’s online electrical engineering program) after my experience in the hospital (I missed a ton of work and I wasn’t up for it at that moment.) A humorous situation was how my kids dealt with my isolation. They stayed away, and called me on the phone to talk, and when I came up to use the bathroom they shouted at me to “GET BACK IN YOUR HOLE!” That kind of thing sustained me, to be honest.

Did others in your family or friend group get sick with COVID-19 too?

A couple of my coworkers became sick as well, though not to the degree I experienced.

Do you have lingering symptoms since you recovered?

I don’t sleep well anymore. I mean, I had issues with sleep before, but now I’m kind of constantly half awake. I had some PTSD when I got home…nightmares about what I saw while I was under…that has faded. It’s been replaced by an inability to settle into sleep. I still have mental fogginess. I have resumed classes after taking the summer off and I’m finding it MUCH harder to learn and retain information. Physically, I feel like I’m finally muscularly back to where I was, but exertion is harder on me. I took up running a couple of years ago and now, doing the “couch to 5k” program winds me completely.

Are you back to the things you normally do?

For the most part. I just do them at a different intensity than I used to. Slower and more methodical.

Is there anything you wish you had known prior to becoming ill to help prevent getting it?

Frankly, when I got it, we didn’t know much about it at all. It was pre-mask, isolation and quarantine. I don’t think I could have done anything different.

How can people do their part to help stop the spread of COVID-19?

Stay in the house when you can. Maskless contact with those you are living with only. Wash your hands! Wear a mask when you need to go outside. Keep at least 6 feet away from people if at all possible. Be wary of touching “very public” places (handrails, door handles, etc…basically all handles.) Be nice to people. Thank nurses and doctors every chance you get. They are HEROES.