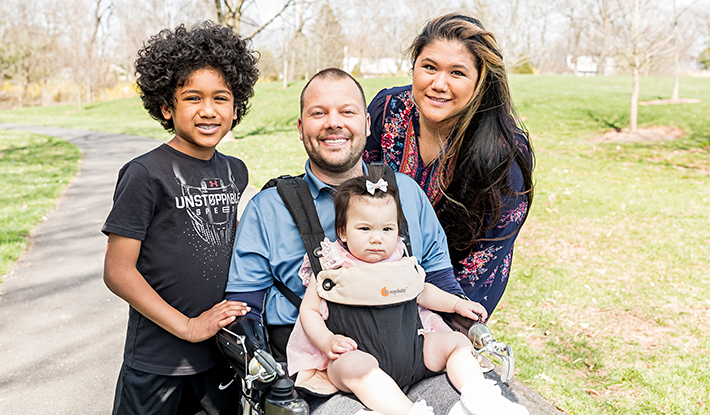 From part 1: In June 2017, when an infection triggered a widespread sepsis attack, Clark Deardorff’s life hung on drastic measures. But with help from Lehigh Valley Health Network (LVHN) doctors like James Wu, MD, and nurses like Lisa Forstburg, RN, he lived to see the baby his wife, Celeste, delivered during his hospitalization.

While Clark Deardorff fought for his life after developing a relentless sepsis infection, his wife Celeste, who was expecting their daughter, was quickly approaching the baby’s due date. “I knew I was going to have to deliver the baby without Clark,” Celeste says. Originally, the birth was planned at a hospital near their Harleysville, Pa., home, but plans had to change. With help from registered nurse Lisa Forstburg, RN, Celeste toured LVHN mother-baby unit facilities and rescheduled C-section delivery to LVH–Cedar Crest.

On June 28, the couple’s daughter, Ava Jordan, was born. The same week, Clark’s legs were amputated.

Limbs for a life

Clark’s heart stabilized on extracorporeal membrane oxygenation (ECMO) so he was moved to LVHN’s Regional Burn Center for complex wound care. But infection still attacked his arms, requiring a second round of agonizing decisions. “Following leg amputation, we needed to amputate Clark’s arms to save his life,” says Burn Center medical director Daniel Lozano, MD. “I frankly thought he had a 1 or 2 percent chance of making it through surgery.”

“I tried to envision him with Ava and our older son, Ares, years from now and us retired, enjoying life,” Celeste says. “I believe in the power of positive thinking. And Clark is a fighter.”

Lozano also proceeded with hope. “We worked hard to salvage at least one upper extremity below the elbow,” he says. “That would give him a more functional prosthetic later.”

Living in LVHN’s family lodging, Hackerman-Patz House, Celeste felt heartbroken watching 8-year-old Ares cope. She explained that to save daddy, they needed to take his arms and legs, but he would get robotic ones. “Like Iron Man?” Ares asked. “Yes, just like Iron Man,” she replied. “Well,” Ares said, “he will be Iron Daddy then.”

Despite additional complications like kidney failure, pneumonia and multiple reconstruction surgeries, Clark somehow pulled through. “The most remarkable part is that he emerged the funny, positive person he was before,” Forstburg says. “He far surpassed expectations.”

In September, Clark left LVH–Cedar Crest for rehabilitation and a new life with prosthetic limbs. “I’m perfectly fine with the decisions that were made,” he says. “I want to be here to see my children grow up.” With perseverance, patience, creativity and support from family, neighbors and community, Clark is active like before – coaching Ares in basketball and baseball, going to movies and restaurants, helping in the community and spending time with baby Ava.