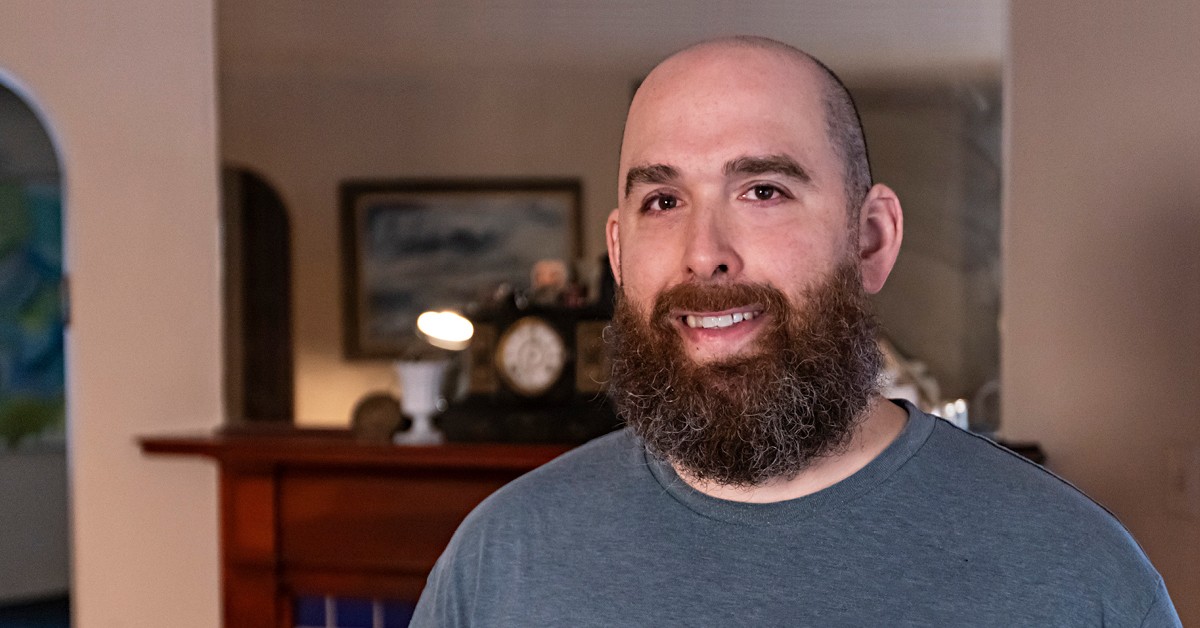 Journey to Recovery After a Cardiovascular Event

As 46-year-old Marc Bernstein relaxed reading a book on September 28, he suddenly felt a deep pain in his chest. He had just drank something cold, so he dismissed the pain by attributing it to the drink’s icy temperature.

“But it wouldn’t go away, and I started sweating,” Bernstein says, “Then the pain was in my elbow and my left arm, and it was rather intense.”

Prior to this event, Bernstein, of South Whitehall Township, walked or slowly jogged up to two miles daily. The goal for his COVID-19 quarantine workout was to ramp up to running.

But on that day his chest pain was so severe, Bernstein crawled upstairs to get help from his wife, Sara Vigneri. She called 911.

Bernstein was taken by ambulance to the Emergency Department at Lehigh Valley Hospital–Cedar Crest.

The next day, cardiologist Dzanan Ramic, MD, with Lehigh Valley Heart Institute, explained to Bernstein and Vigneri what needed to be done.

"I remember him walking over to me and pointing to my heart on a screen. He explained that there was narrowing in the artery and I would need to have a stent put in,” Bernstein says.

In the catheterization (cath) lab, Ramic inserted a long, thin tube through an artery in Bernstein’s wrist to place the stent that would open the artery. Afterwards, he used a sketched diagram of Bernstein’s heart to help explain where the stent was placed.

“He went through everything with my wife and me and gave us a sketch showing where in the heart it is,” Bernstein says.

But, again, he felt pain. “I was pretty concerned,” Bernstein says.

After calling his primary care physician, Bernstein went back to the hospital. This time his heart was OK, but he had appendicitis.

“A total coincidence,” Bernstein says. It was too soon after the heart procedure to remove his appendix, so health care providers prescribed medication. He still has his appendix, but the incident delayed starting cardiac rehabilitation.

After about two weeks, Bernstein met with a physical therapist who evaluated him and mapped a rehabilitation plan.

“I told him up front that I'm going to push myself as hard as they'll let me. I wanted to make more than a full recovery. I wanted to be better off than when I had started,” Bernstein says.

The journey to reach his pre-heart attack fitness goal resumed.

“They were able to gauge where I was with my stamina and they did some tests. I remember I had to stand up from a chair, walk over, touch something and walk back to see how quickly I could do it,” Bernstein says.

Bernstein attended rehab three times a week. The staff, from the person who checked him in to the health care providers directing his rehabilitation session, made him feel safe and welcome, he says.

“They were all professional but fun. They always asked about my family, my day, nothing personal, just wanting to say, ‘How's everybody doing?’ They made me feel comfortable and safe to try to push myself,” Bernstein says.

During 45-minute to one-hour supervised sessions, the cardiac rehabilitation team watched Bernstein’s heart rate and rhythm using telemetry monitoring. This allowed health care providers to track the electrical activity of his heart during a workout, which would show if there were problems with how it was beating.

As Bernstein worked out on a treadmill, elliptical, bike, rowing machine or arm bike, the rehab staff set and tweaked parameters. Those adjustments for Bernstein’s age, fitness level and conditions allowed for adaptations to his workout or let the physical therapist know he should take a break. It also let the staff know if they needed to alert Bernstein’s cardiologist about a problem.

“I really appreciate that they were so invested in my personal recovery,” Bernstein says. The therapists kept him motivated by coaching him during his sessions, then celebrating his improvements.

“Everyone was being very careful with speed, taking your turn and making sure the equipment is clean, which takes the extra time, but it's obviously necessary,” Bernstein says of the precautions used due to COVID-19.

Bernstein uses what he learned at rehab to work out at LVHN Fitness–Cedar Crest.

“I still remember my routine because I do most of it now at the fitness center,” he says, adding that he monitors himself for symptoms.

“I learned a lot about myself in rehab. Where my heart rate should be, and when and how I can push myself as well as how to track that,” Bernstein says. He’s put that knowledge to work as he progresses his workouts to improve his gains.

When bad weather keeps him at home, he doesn’t scrap his workout.

“My daughters, my wife and I, we do a Zoom workout almost every day, at least three times a week for 30 minutes. It's a cardiovascular and a core workout,” Bernstein says, “They're helping to keep me responsible and I do that as well as go to the fitness center.”

“My family stepped in to be the cheerleaders that, in many ways, the Heart Institute and the cardiac rehab team have been throughout my recovery,” he says.

Journey to Recovery After a Cardiovascular Event