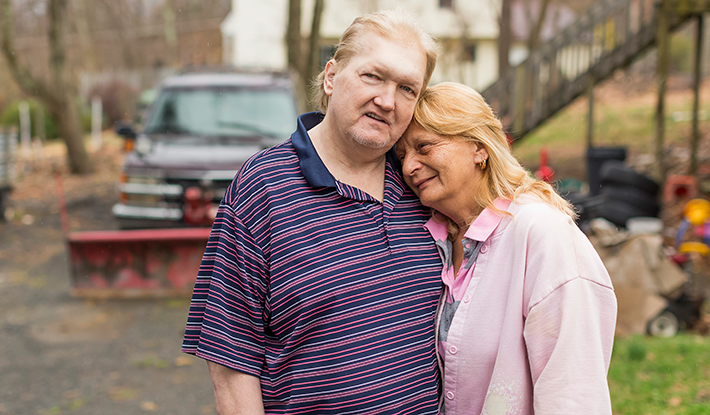 Ken Kolakowski, 53, of Bushkill, Pa., father of six and grandfather of eight, is feeling fine these days. Nearly everyone who knows him finds that amazing because not long ago he was the opposite of “fine”.

“Everybody tells me I’m a miracle,” Kolakowski says.

Renal cancer cost him a kidney in 2012. In 2016, a tumor appeared on the remaining kidney. Six months after surgery to remove it, a scan showed the cancer had spread to Kolakowski’s adrenal gland and lymph nodes. At this point, his primary care physician, Ian Foster, MD, thought that Kolakowski should meet his friend and colleague, hematologist oncologist Suresh Nair, MD, Physician-in-Chief at the Lehigh Valley Cancer Institute and an expert in kidney cancer.

One of the first things Nair did was order a magnetic resonance imaging (MRI) study of Kolakowski’s brain. It’s unusual for kidney cancer to spread to the brain, but Kolakowski had begun having headaches. The scan revealed eight brain tumors, one so large it demanded emergency surgery.

“I unfortunately had to give Ken the news on the phone,” Nair says. Rather than go home that night, Kolakowski was admitted to Lehigh Valley Hospital (LVH)–Cedar Crest and scheduled for surgery.

With the crisis averted, Nair turned to formulating a treatment plan. It would be an aggressive one. Life expectancy for a patient with cancer like Kolakowski’s is generally 3 to 6 months, but he was determined to fight. Sean Quinlan-Davidson, MD, radiation oncologist at LVH–Pocono Cancer center, provided wholebrain radiation. Nair then started Kolakowski on a new medication designed for advanced kidney cancer. The collaboration involved multiple physicians, disciplines and facilities, “a great example of teamwork,” Nair says.

That was all more than a year ago.

Looking forward to the future

Kolakowski’s brain is back to normal. “There are just a few scars where the tumors had been,” Nair says. Scans still show an adrenal tumor, but it’s shrinking. Quinlan-Davidson will take care of it with an innovative radiosurgery called Varian EdgeTM. “This minimally invasive approach is incredibly accurate. It allows us to use a higher dose of radiation in fewer sessions with less risk to healthy tissues that are nearby – in this case, healthy tissue adjacent to Ken’s adrenal gland,” QuinlanDavidson says.

Kolakowski continues on the drug Nair prescribed, with a goal to celebrate his 25th wedding anniversary. It’s six years away.

“And then we’ll start working toward another 25 years,” Kolakowski says.

Do you need an evaluation?

LVHN to Begin Vaccinating Children Ages 12-15 With the Pfizer Vaccine on May 13
Hazleton Area Student's Video Wins $10K for School
Grace for Today
LVHN to Offer No-Appointment Drive-Through COVID Vaccinations at Dorney Park on May 12
Ground Broken for LVHN Sports Performance Center at Schuylkill Haven Area School District
There’s little room for skepticism with COVID-19 vaccine, our lives are on the line