Lehigh Valley Hospital Named Among Best in U.S. for the 21st Consecutive Year

Ranked nationally in 5 specialties and #4 in Pa. by U.S. News & World Report 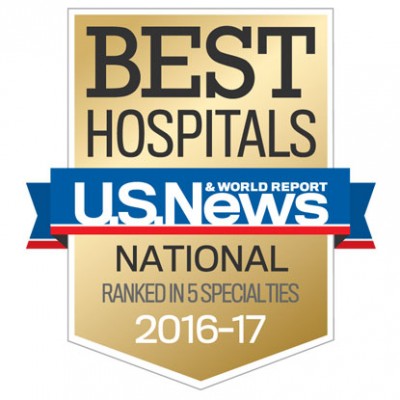 The 2016-2017 list names LVH among the nation’s top 3 percent of leading hospitals in five categories: cardiology and heart surgery; gastroenterology and GI surgery; geriatrics; orthopedics; and pulmonology. These specialties also made the 2015-16 Best Hospitals list.

This is the 12th time cardiology and heart surgery, and geriatrics have been on the list; the 11th for gastroenterology and GI surgery; the eighth for orthopedics; and the seventh for pulmonology.

LVH is the only hospital in the area to make the U.S. News national rankings in at least one specialty area every year since 1996.

“This recognition reflects our health network’s relentless focus on improving the quality of care we provide to our community, to keep them healthy and care for them when they are ill or injured,” says Brian Nester, DO, MBA, FACOEP, LVHN’s president and chief executive officer. “Our LVHN colleagues are to be commended for their unwavering commitment to their patients.”

U.S. News evaluates hospitals in 16 adult specialties. In most specialties, it ranks the nation’s top 50 hospitals and recognizes other high-performing hospitals that provide care at nearly the level of their nationally ranked peers.

“U.S. News evaluates nearly 5,000 hospitals nationwide,” said Ben Harder, chief of health analysis at U.S. News. “A hospital that has emerged from our analysis as one of the best has much to be proud of.”

U.S. News Best Hospitals rankings help guide patients to hospitals that deliver outstanding care. Objective measures such as patient survival, the number of times a given procedure is performed, infection rates, the adequacy of nurse staffing levels and other data largely determined the rankings in most specialties.

The specialty rankings and data were produced for U.S. News by RTI International, a leading research organization based in Research Triangle Park, N.C.

The rankings have been published at http://health.usnews.com/best-hospitals and will appear in print in the U.S. News Best Hospitals 2017 guidebook, available in bookstores and on newsstands in August.

Lehigh Valley Hospital Named Among Best in U.S. for the 21st Consecutive Year