Lung Cancer Without Smoking? It Happens More Often Than You Think. 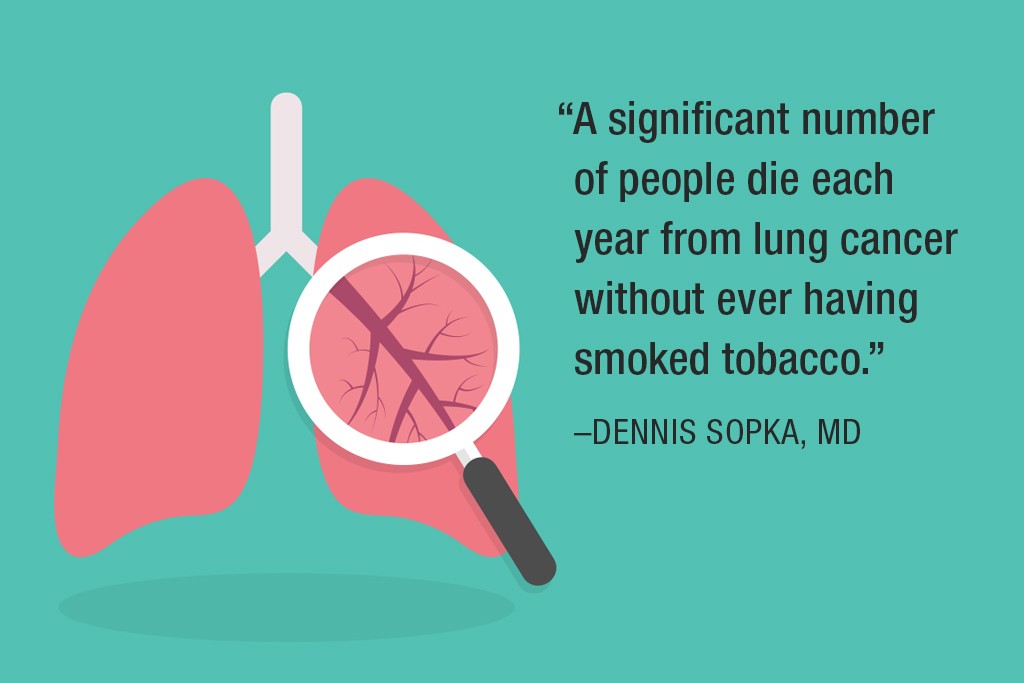 According to the U.S. National Library of Medicine and the National Institutes of Health, smoking tobacco contributes to about 75 percent of lung cancer cases around the world. In the U.S. alone, some estimates have it close to 90 percent. But people should be aware that a significant number of people die each year from lung cancer without ever having smoked tobacco.

Independent of smoking, environmentally and occupationally related causes of lung cancer are among the top 10 causes of all cancer deaths in the U.S. The most common are asbestos, which was very popular in building construction and fireproofing for most of the 20th century until its danger as a health hazard was realized, and radon, an odorless gas which occurs naturally as a radioactive decay product of radium.

Other agents range from industrial chemical exposures to radiation from consistent exposure to X-rays to consistent exposure to some indoor or outdoor emissions. Even second-hand smoke from tobacco products can contribute to lung cancer. I once treated a man who owned a bar and encountered second-hand smoke virtually every day. He developed lung cancer despite never smoking a day in his life.

Asbestos and radon exposure are particularly noteworthy for this part of the country. Eastern Pennsylvania has a higher density of buildings and homes built in the 1970s and earlier, thus creating more potential of asbestos danger, and large portions of the region have a history of a considerable amount of mining, thus creating more potential of radon danger below ground.

However, the key word here is “potential.” There’s a lot of controversy about just how much risk these agents actually present, meaning how much exposure to these elements is needed to make them hazardous in terms of lung cancer. The dangers from asbestos have been well known for about 40 years now, and a radon test is standard in most places before moving into a home or building. Widespread awareness has increased.

But as I stated earlier, a significant number of people still die each year from lung cancer without ever smoking tobacco. So there remains cause for concern. Unfortunately with lung cancer, there are no early warning signals. By the time symptoms like a chronic cough, shortness of breath, fatigue and weight loss occur, the disease already has progressed. What we do know is, as with smoking, prolonged exposure appears to add to lung cancer risk. So it would be prudent to limit the exposure if possible.

Lung cancer is not always about smoking tobacco. It’s in your best interest to know the reasons why.

Lung Cancer Without Smoking? It Happens More Often Than You Think.