Voorhees, N.J.-Lansdale, Pa. family celebrates Christmas and a gift of a lifetime 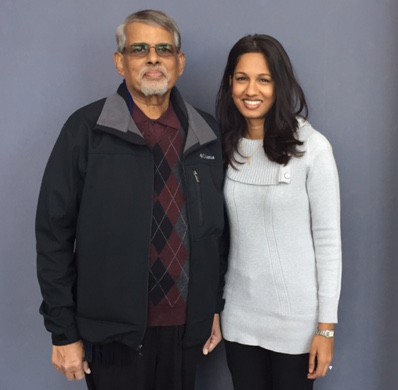 Christmas this year will be extra-special for the Varghese-Kuryan family of suburban Philadelphia, celebrating a precious and unusual gift recently given to the family’s patriarch by his daughter, a physician in Allentown.

In late September, Lansdale resident, Ranita Kuryan, MD, pediatric endocrinologist with Lehigh Valley Health Network, donated one of her kidneys to her father Raju Varghese, 69, of Voorhees, N.J. The transplant ended three years of arduous hemodialysis treatments that kept Varghese alive after his own kidneys failed due to complications from diabetes and high blood pressure.

Kuryan considered donating a kidney to her father through a hospital in Philadelphia or New Jersey, but realized the distance combined with her busy schedule at work and home would present formidable challenges to complete the required battery of tests that precede organ donation.

She was determined to find a way to provide a kidney to her father, then on a drive home from work from Allentown to Lansdale in October 2015, Kuryan spotted a billboard that seemed to answer her prayers. Pictured on it was Michael Moritz, MD, chief of transplant surgery at Lehigh Valley Health Network (LVHN). “Leading the region in kidney transplants,” the billboard read.

Seeing the billboard sparked her interest in learning more about becoming a donor at LVHN. “I wanted to give my father a better quality of life and the freedom to enjoy his grandchildren and travel, especially to his native India,” Kuryan says.

Over the next year, the married mother of two young children had scores of tests and appointments at Lehigh Valley Hospital, most during her lunch breaks. The tests ensured Kuryan was healthy enough for the surgery and a good match for her father.

At first she told only her mother of her intention, then eventually shared her plan with her father. Initially, Varghese hesitated to accept his daughter’s plan, worried the loss of a kidney might affect Kuryan’s own health. “I wanted to be sure her family would be okay with Ranita giving me a kidney,” Varghese says. They assured him they were.

Even still, about six weeks before the transplant was to take place, Varghese was still unsure about accepting his daughter’s kidney. Finally, Kuryan gave him an ultimatum: “If you don’t take it, I’ll give it to someone else who needs it.”

“I knew at that point, there was no way out,” Varghese says.

On Sept. 28, Patty Liu, MD, removed one of Kuryan’s kidneys, and Michael Moritz, MD, sewed it into Varghese during a four hour “living-related” transplant operation at Lehigh Valley Hospital–Cedar Crest in Allentown, Pa.

Today, father and daughter are recovering from surgery. Kuryan is more committed than ever to staying healthy for her family and patients. Varghese is getting used to being free from exhausting dialysis treatments, and is gradually regaining his energy, strength and optimism.

And at a time of year that holds profound spiritual significance for their families, both father and daughter are thankful that Kuryan was able to give him the gift of a lifetime.