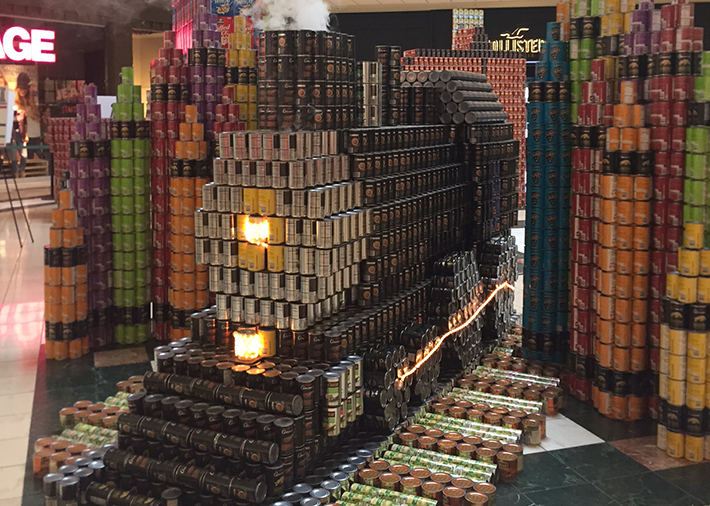 You’re bound to take notice if you’re walking along the first floor of the Lehigh Valley Mall sometime before Friday morning – a smoking locomotive driving chugging through a mountain made of crayons.

Upon closer inspection, you’ll notice it’s not actually chugging, but standing still. And it’s not really a locomotive or a crayon mountain either. It’s a sculpture made of cans of all sorts and sizes.

“It’s 7,467 cans actually,” says Jennifer Fink, Director, Planning and Interiors for Lehigh Valley Health Network (LVHN), who was part of a team creating one of seven artistic can displays for the second annual “CANstruction Lehigh Valley” competition, which actually is part of a national initiative sponsored by the Society of Design Administration dedicated to supporting hunger relief.

Created in 1992 by a group of architects and engineers in New York City, CANstruction events eventually would blossom to events held around the country, helping to raise more than 40 million pounds of food for local food banks. The Lehigh Valley event is sponsored by The American Institute of Architects, Eastern Pennsylvania Chapter, and The Construction Specifications Institute, Greater Lehigh Valley Chapter. Every can used in the sculptures contains nonperishable food and will be donated this year to the Second Harvest Food Bank after they’re disassembled on Friday.

LVHN was invited to join one of the seven competing assembly teams by vendors BDA Architects LLC of Clarks Summit, Pa., and Whiting-Turner Contracting Co., a nationwide firm with an office in Allentown. Fink and LVHN Facilities & Construction colleague Brenda Rocchino, Project Manager, Interiors, were part of a 25-member team that designed a sculpture based on this year’s theme, Lehigh Valley Heritage.

“We started our planning meetings in early May and settled on a design,” Fink says. “Once it was approved, we began approaching different vendors for cans of food they would consider donating. The nutritional value of the food is an important factor in CANstruction, so you won’t see cans of soda or things like that in the displays.”

After a few dry runs, Fink, Rocchino and their team took part in the competition on Sept. 29. They had 12 hours to put together their sculpture in a 10-foot-by-10-foot-by-10-foot area after making five trips with a box truck and hauling cans into the mall on two drywall carts.

“We had to work in groups of five people at a time,” Fink says. “The structures have to be self-supporting and you have to be careful not to mar the cans and their labels. We were allowed to use thin strips of Masonite and zip ties to put them together. It was a challenge to keep it stable.”

The team added a smoke machine emitting puffs on a timer to add some realism to the locomotive stack. The group managed to finish it off in eight hours and had time to admire the work of other entrants, which included a Liberty Bell, Lehigh Valley IronPigs bacon strips, a race car and a tractor with corn stalks.

LVHN won honors for structural integrity and best meal (nutritional value) at an awards ceremony honoring the outstanding sculptures held at BRAVO Cucina Italiana restaurant at Lehigh Valley Mall on Thursday evening. Overall, more than 38,000 cans of food and $4,000 in donations were collected for Second Harvest.

“The whole experience was amazing fun,” Fink says. “I hope we get the chance to do it again next year.”