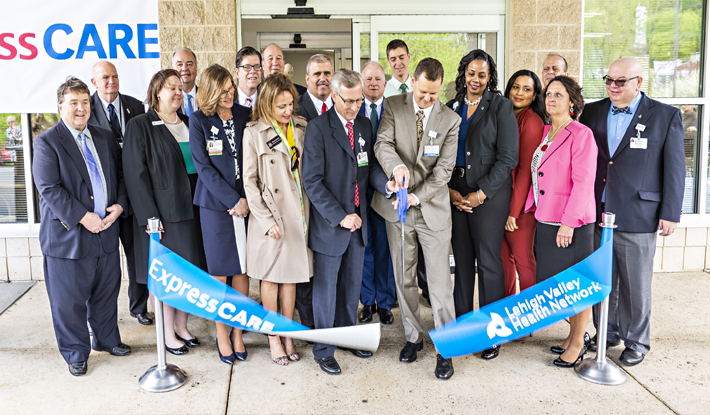 With the cut of a ribbon, Lehigh Valley Health Network (LVHN) introduced ExpressCARE to Schuylkill County.

“Today, we share our latest investment in your health with the establishment of our first ExpressCARE in Schuylkill County,” said Brian Nester, DO, MBA, FACOEP, LVHN President and Chief Executive Officer. “ExpressCARE adds yet another layer of health care convenience for this community.”

“This is a giant step in making care more accessible to a broad range of people in need,” said William Reppy, President of Lehigh Valley Hospital (LVH)–Schuylkill.“It is close-to-home, convenient care.”

LVHN leaders note the timing of the ExpressCARE–Schuylkill Medical Plaza opening coincides with the closing of the Emergency Department at LVH–Schuylkill’s S. Jackson Street campus. That closing is set for the same time as the opening of ExpressCARE, 8 a.m. Wednesday, May 1. Going forward, all Emergency Room services will be provided exclusively at LVH–Schuylkill’s East Norwegian Street campus, 700 E. Norwegian Street, Pottsville.

“Illness or injury can happen at any time to you or your loved ones,” said David Burmeister, DO, LVHN Chairman of Emergency Medicine. “When you need ‘unexpected’ care, you now have two options in Schuylkill County. If your illness or injury is more serious, you should go to the emergency room.For ailments that are minor in nature, there is ExpressCARE.”

Burmeister referenced a brochure that gives recommendations when to use

ExpressCARE and when to go to the ER.