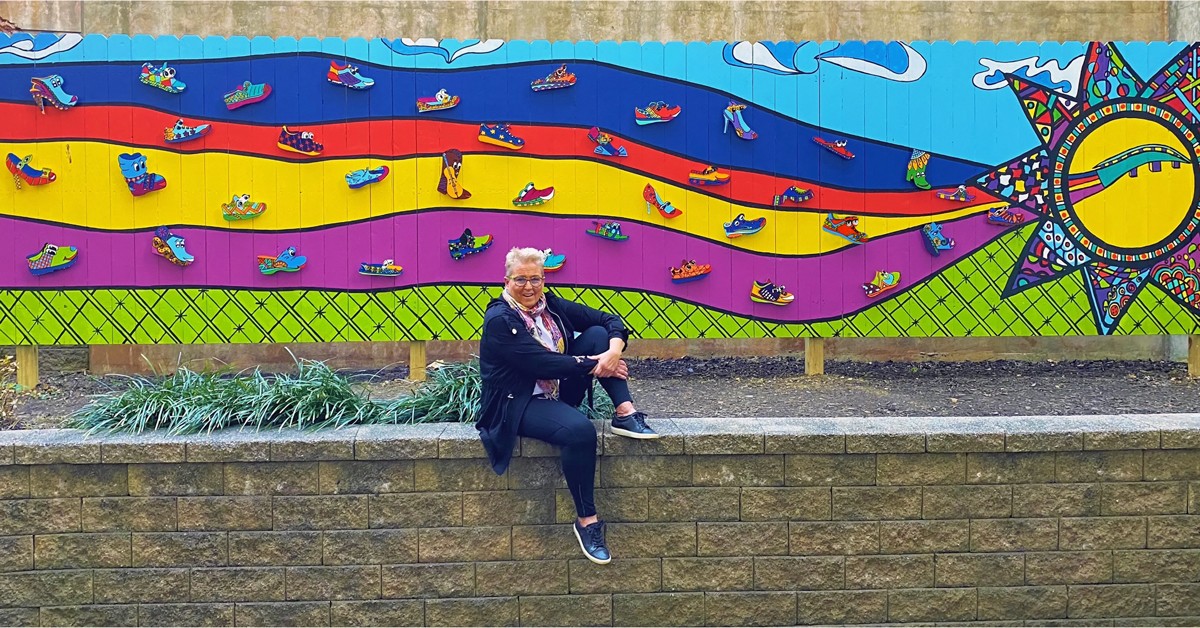 LVHN Patient Gives Back Through Art

Age 25, Ellen Kalinosky and her then fiancé, Joe, were planning their future. Following state requirements for a marriage license in 1983, they went for their blood tests. Ellen’s test revealed that her health and her future were in serious jeopardy.

Art: When there are no words

For nearly 40 years, Ellen has found comfort and hope while using her creative side. “I learned that I could use my creativity and art to tell a story that was hard to put into words.” Her challenges changed her perspective to one of gratitude and eventually led her to pay it forward by volunteering at LVH–Cedar Crest. Soon she became one of the go-to volunteers for all things creative. When the LVH–Cedar Crest neurophysiology lab team expressed a desire to update one of its rooms, LVHN volunteer services immediately thought of Ellen.

“Over the years I’ve looked at a lot of walls in health care spaces,” Ellen says. She not only used her own life experience, Ellen learned about the experience of neurophysiology lab staff and patients and created a bright, fun and interactive mural.

A second request came later through the Office of Philanthropy from the LVH–Cedar Crest radiation oncology team. The courtyard used by this team was in need of some TLC. The previous year, Ellen got to know some of the team when she volunteered for a project, and during that experience, she learned what the team does, why they do it and how they do it. When approached about ideas for the courtyard, Ellen used her first impression of the team – “They each bring their uniqueness as they walk together as a team to take care of their patients.”

Making it their mural

“I wanted to create something that would communicate to them that what they do every day – it matters a lot.” Ellen asked team members for a photo of their favorite shoe. “I didn’t know what they would think,” she says. As their shoes came to her, unexpectedly, so did their stories. Over the course of six weeks, Ellen “cartooned” images of each shoe and placed them on a bright multicolored path leading to the sun on the horizon.

Through the window, the radiation oncology team enjoyed watching Kalinosky work and showed their gratitude by waving and holding up thank you notes. “Paying it forward gives me more blessings than I am ever able to give,” Ellen says. “As I was creating, I’d look up at the side of the Lehigh Valley Cancer Institute building and then I’d look down at the mural – there are no words.”

Watch how Ellen builds her murals

For more inspirational stories and everything you need to know about COVID-19, please visit LVHN.org/COVIDStrong.

LVHN Patient Gives Back Through Art