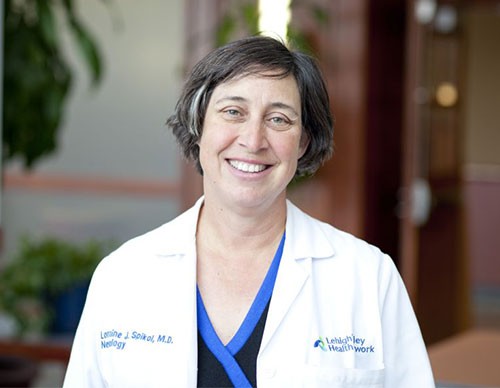 Jerome Greene, Ph.D., 77 of Fogelsville, was becoming forgetful and repeating himself with unusual frequency. At the urging of his wife, Greene, a former dean of social science and allied health at Lehigh Carbon Community College, met with Lorraine Spikol, MD, (pictured at right) LVHN neurologist and Alzheimer’s and dementia specialist. She is the principle investigator at LVHN for a new research study that uses powerful PET scan imaging to look into the brains of suspected Alzheimer’s patients. Spikol entered Greene into the study in hopes of finding the cause for his mental decline.

Spikol diagnoses 40-50 patients each year with ‘suspected’ or ‘probable’ Alzheimer’s. Standard diagnosis is based on an individual’s history and physical exam as well as on cognitive testing. But since there’s currently no way to positively confirm this dreaded disease in people while they are alive, treatment often is delayed.

“We need to identify people earlier in the disease process, so we can begin treating them sooner and encourage them to pursue what’s important to them while they still have the time.” Spikol says. “We know Alzheimer’s doesn’t develop suddenly, but worsens gradually over time.”

The Imaging Dementia Evidence for Amyloid Scanning (IDEAS) study is trying to determine the usefulness of PET scanning of amyloid deposits in diagnosing patients who are being evaluated for Alzheimer’s disease and dementia where the cause is unclear.

Alzheimer’s disease is caused by an abnormal protein called amyloid that accumulates in the brain, and damages and kills brain cells. Before amyloid PET scans, the only way these plaques could be found was during an autopsy.

Greene’s PET scan failed to find amyloid deposits that would cause Alzheimer’s, providing him only temporary and partial relief. “Now I can tell my family that I don’t have Alzheimer’s,” he says. “But we need to find out what’s causing my forgetfulness.”

PET scans can detect and measure amyloid when a patient has memory loss, before the onset of Alzheimer’s. The scan can also tell if the memory loss is due to early Alzheimer’s, to another kind of dementia or to normal aging.

“Amyloid PET scanning represents an advancement in diagnosing Alzheimer’s earlier and more accurately,” Spikol says. “It could become the Gold Standard for diagnosis, something we desperately need.”

IDEAS is sponsored by the American College of Radiology (ACR) and American College of Radiology Imaging Network (ACRIN), with funding and direction from the Alzheimer’s Association, the ACR and the makers of the FDA-approved radiopharmaceutical used for amyloid imaging. Nearly 19,000 individuals nationwide will be enrolled in this $100 million study, which is open only to Medicare patients.

Patients can’t directly enroll in the IDEAS study; they must first have been evaluated for their memory problems by their primary care doctor or a neurologist, including undergoing blood tests and a prior brain scan. A dementia specialist, such as Spikol, works with a nuclear radiologist to enroll the patient if his/her case meets the study criteria. The radiologist performs and interprets the scans; then the dementia specialist and radiologist discuss the results with the patient. Results also are provided to the patient’s primary care physician.

For more information about the IDEAS study, call 610-402-CARE.