Plans include a new hospital and a medical office building, all designed for patient convenience and easy access to LVHN services. 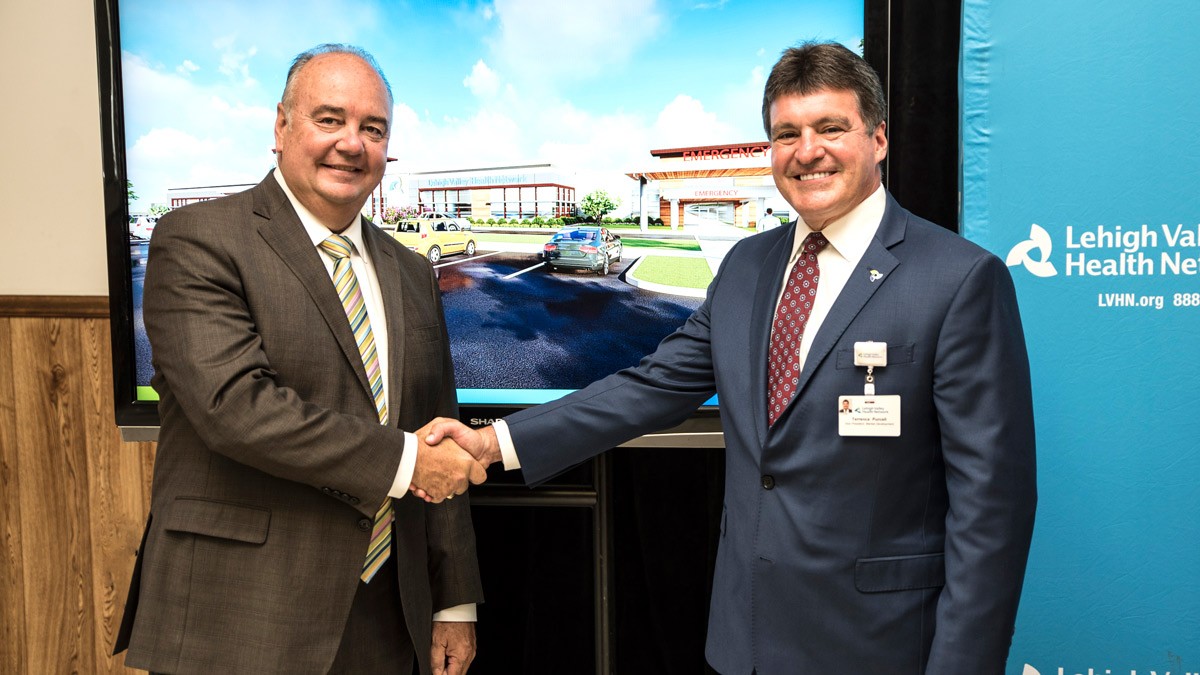 Brian Nester, DO, MBA, FACOEP, LVHN’s President and Chief Executive Officer (CEO), told attendees of a news conference at the Mahoning Valley Ambulance Association that the new hospital, to be called Lehigh Valley Hospital (LVH)−Carbon, will be built on an open property purchased by the health network cattycorner to the Walmart Superstore on Blakeslee Blvd.

Nester said initial plans call for a hospital that includes all private rooms for inpatient care, and a medical office building which combined will occupy 89,000 square feet of space. The health network expects to break ground on the project next spring and opening is anticipated in the fall of 2021. The hospital is expected to cost $65 million and create about 150 jobs.

“Residents of Carbon County already trust in the care they receive at LVHN. As is the case in all the communities we serve, we foster relationships with health care providers who are not employed by LVHN but practice independently,” said Nester. “By having a modern health care facility in Carbon County, we will strengthen partnerships with those independent providers and other community-minded organizations that are aligned with our mission to heal, comfort and care.”

Nester also announced that Terrence Purcell, LVHN’s Vice President for Market Development and a native of Mahanoy City, Pa., will serve as President of the new hospital.

“Throughout my health care career here, I have seen many examples of how Lehigh Valley Health Network has been a reliable and trustworthy health care partner for residents,” Purcell said. “I am ready to further that partnership and lead this new hospital because I know it will benefit the health of this community and our neighbors who also are close by in so many ways. My colleagues and I are also excited to work more closely with the great independent physicians in Carbon County.”

Nester said the hospital is expected to provide the following services:

Nester said the new hospital is among several added services LVHN is bringing to Carbon County to allow residents to receive their care closer to where they live. In April, LVHN announced it would open two ExpressCARE locations in the county, one in Lehighton at 363 North First Street and the second in Palmerton in the Pencor Services, Inc. building at 528 Delaware Ave. These will be LVHN’s 20th and 21st ExpressCARE facilities providing residents with access to treatment for common illnesses and minor injuries without an appointment including sprains and strains, cuts and lacerations, poison ivy, rashes, seasonal allergies, flu symptoms, bronchitis, ear infections, sore throat, and fever. ExpressCARE will be open 365 days a year. Hours of operation will be announced closer to the openings later this summer and in the fall.