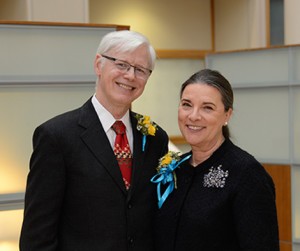 Early on in his career as a cancer specialist, Gregory Harper, MD, PhD, realized that genomic medicine was the future in the battle against cancer. During his 17 years as medical director of the Lehigh Valley Health Network’s (LVHN) Cancer Center, he pioneered a cancer risk and genetic assessment program. This program offers patients the opportunity to understand their genetic risk for cancer and medical, psychological and familial support in making decisions about prevention and treatment related to their genetic profile.

Today, the program has two full-time genetic counselors who provide genetic counseling and recommendations for genetic testing, screening and prevention for patients and families with inherited cancer susceptibility gene mutations.

For their dedication to this effort and to advancing LVHN’s cancer program overall, the genetics program was officially named the Gregory and Lorraine Harper Cancer Risk and Genetic Assessment Program at a ceremony Wednesday at the John and Dorothy Morgan Cancer Center, Lehigh Valley Hospital–Cedar Crest.

Harper retired from LVHN in 2013, but that hasn’t dimmed his commitment to fighting cancer through genomic medicine. Last year, Harper and his wife, Lorraine, endowed $100,000 to cancer risk and genetic assessment program development, professional staff development, physician and patient education, and patient testing.

Over his career as medical director, he became the driving force to establish LVHN’s integrated approach to cancer care. LVHN received designation from the National Cancer Institute as a Community Cancer Centers Program (2010-14). This designation opened greater access to the latest oncology clinical trials and research-based treatments.

Lorraine Harper’s philanthropic efforts are well known throughout the Lehigh Valley area. For many years, she was finance director for the Auxiliary of Lehigh Valley Hospital and was the driving force in the channeling of donations through endowment to various hospital departments. She also was a longtime member of the Allentown Shade Tree Commission and has long been an active member of several committees at Episcopal Church of the Mediator in Allentown.

Keith Weinhold, LVHN’s senior vice president, service lines, and Suresh Nair, current medical director of the cancer program, presented the Harpers a plaque celebrating the christening of the program that will be displayed at the cancer center. Brian Nester, DO, MBA, FACOEP, LVHN’s president and chief executive officer, also honored the Harpers with a specially made clock commemorating the event.