Meet 10 Real Married Couples Who Fell in Love at LVHN 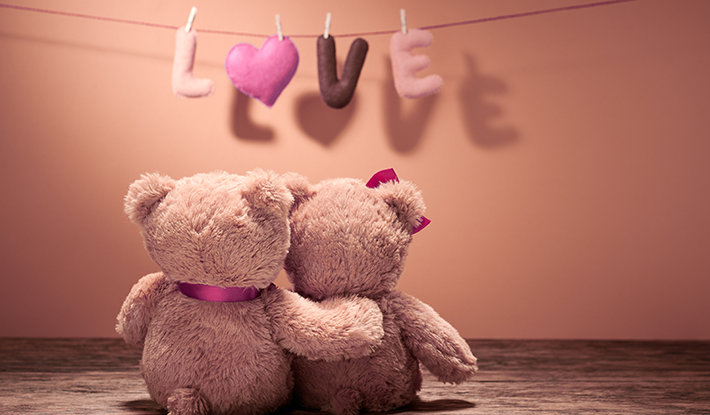 Not only is LVHN a great place for care, it was also a great place to find true love for these colleagues. As we celebrate Valentine’s Day, read the romantic stories of married couples who are also LVHN colleagues. 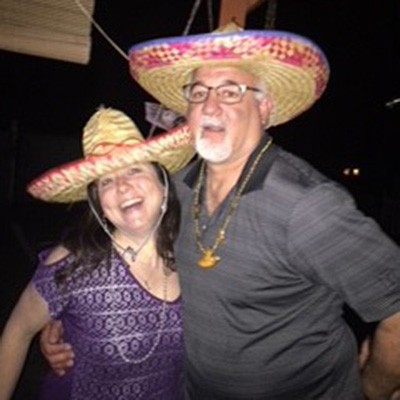 Melissa and Jerry Rodriguez met on the phone about 10 years ago while working their respective jobs at LVHN. Melissa was a coder working at LVHN-Mack Boulevard. Jerry was a behavioral health specialist working at the Weight Management Center. Melissa called Jerry to discuss a few cases they shared. “I noticed her angelic voice and it inspired me to inquire if she would like to meet for lunch,” Jerry says. Melissa accepted. They shared coffee and a sandwich in a convenience store parking lot one day in the pouring rain. That day sealed their fate. Today they continue to party and dance together as husband and wife as often as possible. They’re married for seven years and remain in the same jobs. “Melissa continues to help me remain compliant with my clinical notes and compliant in most all areas of life,” Jerry says. 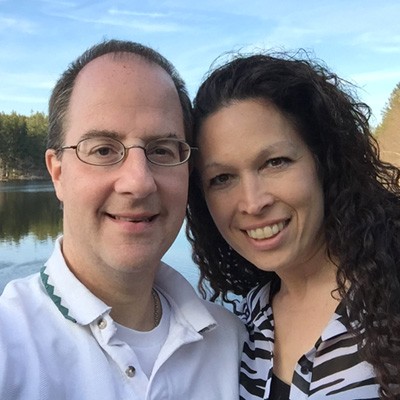 Kevin Vrablik, MD, is Medical Director of Employee Health Services and an Occupational Medicine Physician with LVPG HealthWorks. Lia Vrablik is a Diagnostic Technologist with LVPG HealthWorks. They met at Penn State College of Medicine when he was a medical student and she was radiologic technology student. They’ll be married 25 years in July. 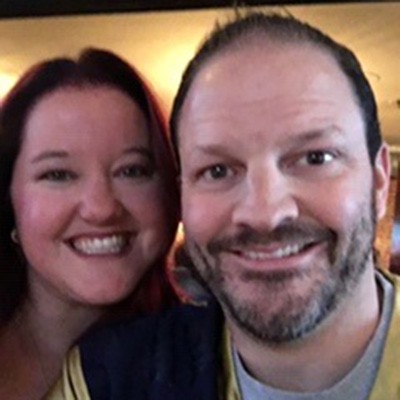 Amy and Tim Morrissey have been together 24 years and will be married 16 years in August. “Being a part of the health network myself for almost four years in central scheduling, it was a goal to have my physical therapist husband come on board with the best health network,” Amy says. Tim is now a PT at our Trexlertown location for nearly two years. They have a 7-year-old daughter, Alaina, and two cats who keep their lives full of craziness and love. 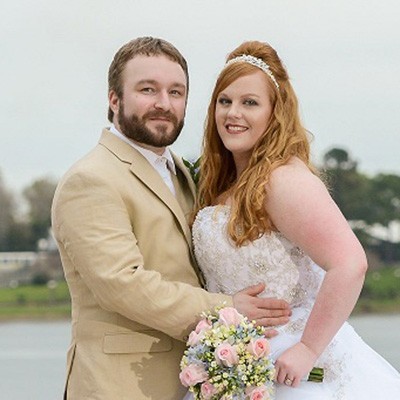 Ryan and Kaitlyn Sutliff met when Kaitlyn interviewed for a technician position at the LVH-Cedar Crest pharmacy in 2011. Ryan also was a pharmacy technician at the time, and was the first colleague she met when she came in for an interview. “He wished me good luck, which clearly worked,” Kaitlyn says. “We started dating a few months later, and had a fairytale Walt Disney World wedding in 2016.” They both still work for Health Spectrum Pharmacy. She is a Clinical Sales Representative and he is the Systems Analyst for our Specialty Pharmacy. When they aren’t working, they like to spend time with their Corgi, Gus, and travel to Disney as much as possible. 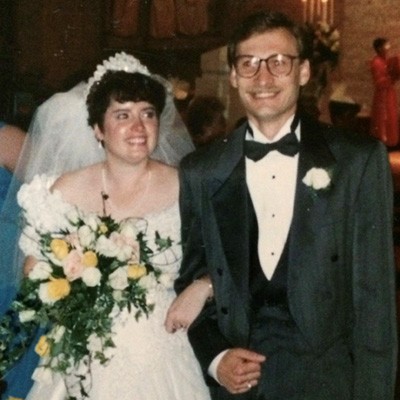 Bill and Nancy Reppy were introduced in 1990 by a mutual friend when Bill was the Director of Radiology (he is now President of LVH-Schuylkill) and Nancy was an ICU staff nurse. At that time, there were many single staff members who would go out together after work at the local clubs. “We socialized as a group for about a year before we started dating in 1991,” Nancy says. They were married in 1993 with many of the staff from the former Good Samaritan in attendance. “One of my favorite moments as a ‘work couple’ was during the ‘Y2K’ preparation when we rang in the new century in the hospital cafeteria with our 11-month-old son, because we both had to check on equipment in our respective departments,” Nancy says. They are now married 25 years and their son is a sophomore at Kutztown University. 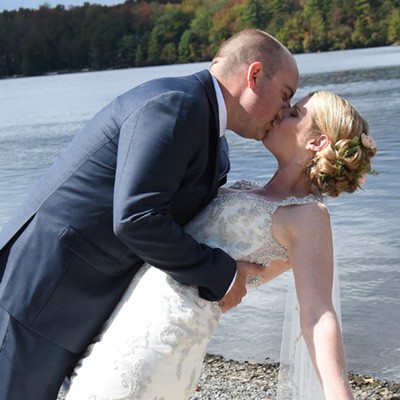 For Bryan and Alexandra Evans, it started with a handshake. Shortly after starting his job, Bryan (Manager of Operations and Business Development, MedEvac/Emergency Transport) was being introduced to Hazleton colleagues when he first met Alexandra, Trauma Program Manager, in her office. Two months later, they were in a meeting together and realized they have many similar interests. “We got married a year and a half later, bought a new house and are loving life with our two children, Eliza and Thomas, and two puppies, Alta and Okemo,” Alexandra says. 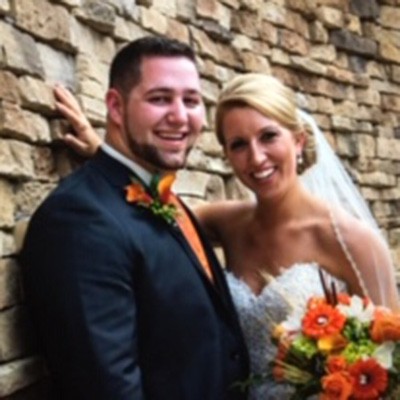 Tia and Price Burger met at LVHN about six years ago. He was a transporter and she was a Cat Scan Tech. “He would bring us patients, and I thought he was the cutest thing I have ever seen,” Tia says. They ended up seeing each other out one night and it was love ever since. They got engaged at the flu campaign on Nov. 8, 2014, where he surprised her with a flash mob. They got married in 2016. Now there is a baby Burger on the way in June. 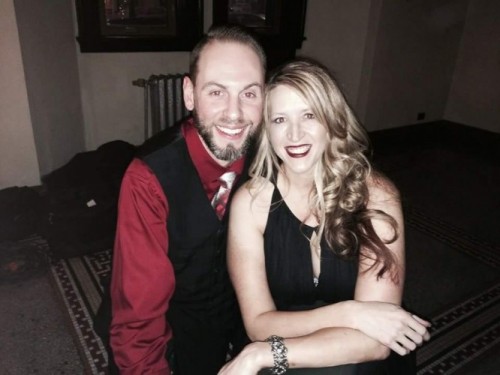 Dave and Jamie Marth met in 2001 while working in the LVH-Cedar Crest ER. At that time, he was a Technical Partner and she was a Receptionist in the waiting room. They started dating in 2002, were engaged in the summer of 2003 and married in the fall of 2005. More than 13 years later, they are blessed with two children. “We love spending as much time as we can as a family traveling to the Smoky Mountains of Tennessee and the Outer Banks of North Carolina,” Dave says. Jamie has been at LVHN for 18 years and is currently an Administrative Partner in the ER. Dave just celebrated 20 years at LVHN and currently works as a Technical Service Manager for the respiratory care department. “Jamie and I are firm believers that you can have a successful relationship with your best friend working in the same place of employment as long as you both continue to put the time and energy into everything,” Dave says. 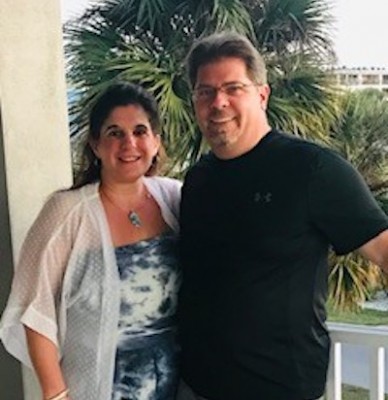 Michelle and Scott Henning met through mutual friends in 1993. Michelle worked at LVH-Cedar Crest; Scott for Albarell Electric. They shared many common interests, but only dated a few months when the “first part” of their love story ended. Almost 10 years later, Scott, still employed by Albarell, was working at the hospital. He took a chance and inquired if Michelle was still employed at LVHN. She was. He called her at that moment. They talked and decided to have dinner and catch up. Five years later they married. In 2014, Scott began working at LVH-Muhlenberg in the engineering department. 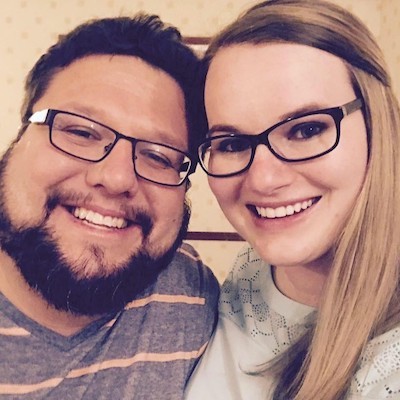 Charlie Hartzel and Michelle Burgess met about four years ago on 7C, the inpatient oncology unit at LVH-Cedar Crest. Charlie was working as a technical partner while completing his RN degree, and Michelle was a new nurse orienting to the floor. They became friends quickly, before eventually realizing their true love for each other. Soon they were inseparable. Their story began with a game of mini golf followed by breakfast at a diner after a long night shift. However, their first “real” date involved celebrating their shared love of tacos and margaritas. They are now happily engaged (with two adorable pups) and will officially tie the knot in February 2020.

Meet 10 Real Married Couples Who Fell in Love at LVHN