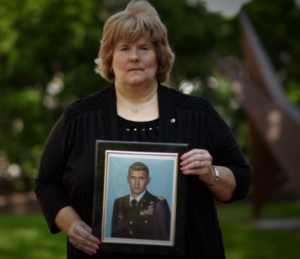 Diane Yoder is a military Mom whose son paid the highest price for his patriotism. Chief Warrant Officer 2 Jarett Yoder was killed in 2013 in Afghanistan while piloting an Apache helicopter. Diane wears Jarett’s wings on a chain around her neck and a silver bracelet bearing his name and company (104th Airborne) on her wrist. They’re not so she won’t forget, but to bring her comfort.

She comes from a family of soldiers, past and present. Her son, Bryon, and daughter, Amanda, saw combat and now are in the reserves – it’s in her DNA.

A case manager at Lehigh Valley Physicians Practice (an internal medicine clinic at Lehigh Valley Hospital–17th Street in Allentown), Diane dedicates herself day and night – at work, home and elsewhere – to helping veterans who fall on hard times. She does it in Jarett’s memory and to make life better for those who sacrificed for her country.

When Jarett died, the veterans became Diane’s extended family. She finds veterans work, food, housing, and of course, medical care and emotional support. She and her husband welcome them into their home, celebrate holidays and birthdays, and mourn losses with them.

“I understand the stress that veterans experience, the frustration of trying to adjust to civilian life,” she says. “I feel it’s my duty to help them, and I love what I do. I taught my children to make good out of bad situations and give back to the community.”

How she bridges the gaps

Diane nudges local veterans and social service organizations to take care of these often-forgotten heroes, many of them with disabilities. She bridges the gaps that often lie between vital resources and their rightful beneficiaries. She also serves on the board of the One Fight Foundation, a peer-to-peer support group to help prevent veteran suicide.

She and her husband created the Jarett Yoder Foundation for veterans and their families. They’ve helped more than 30 veterans through donations for education, food, clothing and other necessities.

They’re planning to open the Patriot House in Allentown to house, feed, educate and soften re-entry for vets in need. Vets like Ian (Mickey) McMillen, 28, who returned from two tours of Afghanistan with an injured spine. “I can’t even hold my kids,” says the former Marine rifleman, who lives in Hellertown.

When McMillen lost his job and medical insurance earlier this year, Diane found him and his family health care through the VA and Pennsylvania Medical Assistance program. She helped him apply for food stamps and connected him with area agencies for support services and employment.

“She’s an absolutely terrific person who goes out of her way for complete strangers,” McMillen says. “She’s tenacious when it comes to getting help for vets.”

Allentown resident James Gatling served in Germany during the first Gulf War and returned unscathed. But he was run over by a truck in 2014 on his way to work and spent three months in Lehigh Valley Health Network’s trauma center recovering from his injuries. Once out of the hospital, he became homeless and jobless. Diane helped him apply for disability, got him a place to live, and signed him up for food stamps and health insurance. He’ll soon be receiving Social Security, thanks to Diane’s intervention.

“In my eyes, Diane went above and beyond what anyone should be expected to do,” Gatling says. “There’s no telling where I’d be without her.”

Diane’s passion for helping veterans stems from her roots and from her loss. Her drive is personal and professional. Ultimately, her goal is making sure soldiers who have risked their lives for their country in faraway places feel its gratitude and have a decent life back home when their tour of duty is over.