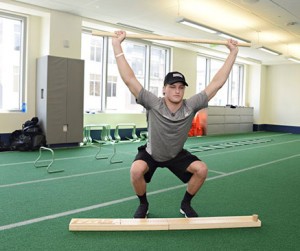 It’s 3 a.m., and Jody Karam has a thought. The father of professional racecar driver Sage Karam, Jody is already planning the next step in his son’s never-ending fitness regimen.

“He’ll wake up from a deep sleep and write down programs and ideas for me,” says Sage, a 21-year-old from Nazareth who is in the starting field for Sunday’s 100th running of the famed Indianapolis 500 INDYCAR race. “I show up to train, and he’s all excited about new exercises he wants me to try. I don’t know how he thinks of these things.”

A dedication to personal training helps Karam to rocket toward the front of the pack in racing. Last summer he visited LVHN Fitness–One City Center in downtown Allentown and shared how his commitment to wellness has helped him enjoy life in the fast lane.

“A healthy lifestyle is all I was ever exposed to in our house,” says Karam. That’s easy to understand. His father Jody, a renowned scholastic and collegiate wrestler, has been the Liberty High School wrestling coach for 20 years. His sister Sydnee, once a state champion swimmer, now competes on a national level. Sage himself won state honors as a Nazareth Area High School wrestler.

A trip to the Indianapolis 500 at age 8 inspired Karam to pursue a racing career. At 15, Nazareth racing legend and neighbor Michael Andretti hired him to join the “Road to Indy” racing development program. He finished ninth in his first Indy 500 start in 2014, and then placed a disappointing 32nd after a first-lap crash in last year’s race. On Sunday, he’ll strap into a car fielded by Dreyer & Reinbold – Kingdom Racing for his third consecutive Indy 500 start.

In addition to racing at Indy, Karam will make some starts later this year on the 2016 WeatherTech SportsCar Championship series, driving a Lexus for the F Performance Racing Team.

“Wellness and fitness has always been a way of life, and it certainly translates to auto racing,” Karam says. “It’s a competitive business.”

On the track, Karam is always in high gear. His training is non-stop too. Here’s how he stays fit and fast:

Karam also embraces healthy eating, with a diet that emphasizes protein (steak, chicken) and green vegetables. “It’s always chicken and a green before a race,” he says. “I try to avoid soda and sweets. But being 21, that’s not always easy.”

Karam is confident his commitment to wellness will lead to a strong finish in Sunday’s Indianapolis 500. “Physical conditioning alone won’t win you the race,” he says, “but the guy who is not training his tail off will fade. I won’t.”

Download your free guide to Sports Medicine and learn how LVHN’s experts can help you get faster, stronger, healthier and fitter.