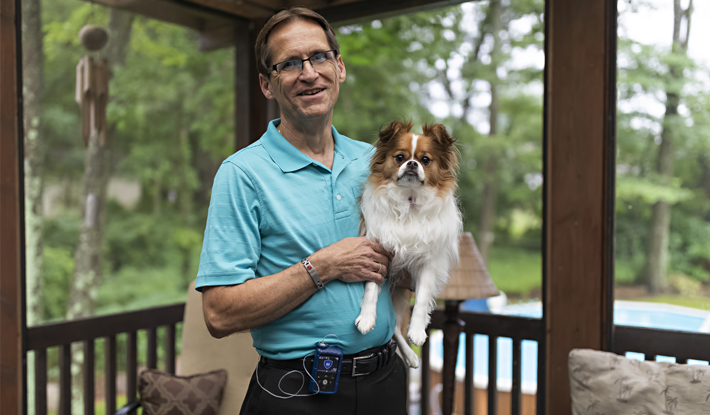 “Before, my blood sugar would spike after I ate, and I sometimes had multiple lows a day. Now I only have two or three lows a month.”

As a result of type 1 diabetes, Palmerton-resident Robin Suarez used to wake up every morning facing high blood glucose levels that left him feeling tired and sluggish. It also meant the start of a daylong battle to regulate his blood sugar level. After being diagnosed in the summer of 2013 at the age of 56, Suarez experienced extreme peaks and severe lows in his blood sugar, even when using traditional diabetic pumps.

But that has changed.

Working with Helwig Health and Diabetes Center at Lehigh Valley Health Network, Suarez became one of the first patients in the nation to receive a leading-edge diabetic pump system that automatically adjusts the user’s glucose levels, 24 hours a day. The Medtronic MiniMed™ 670G Insulin Pump System mimics the pancreas by reading glucose levels every 5 minutes. It then delivers an adjusted amount of insulin – a technology that has been life-changing for Suarez.

“Starting the day with high blood glucose isn’t easy, and it tends to control the rest of the day,” Suarez says. “But the 670G pump keeps my blood sugar stable all night long, and I wake up with more energy.”

Offering both auto and manual modes, the MiniMed 670G offers round-the-clock stability, automatically adjusting basal (background) insulin, and stops insulin up to 30 minutes before reaching preset low limits. Using the auto mode, Suarez has been able to better avoid the peaks and lows he previously endured.

“Before, my blood sugar would spike after I ate, and I sometimes had multiple lows a day,” Suarez says. “Now I only have two or three lows a month. This change doesn’t just impact me, but my family as well. They now have peace of mind that I’m not going to have lows like that anymore.”

To ensure continued success, Suarez and his team at Helwig use LVHN’s MyLVHN patient portal system and Medtronic’s diabetes management tool, called CareLink, to upload information from his pump, run progress reports, and review the pump’s readings and reports. These tools have allowed Suarez to feel connected to his doctors at all times.

“Helwig Diabetes Center and LVPG Endocrinology have played a major role in my journey to regulate my diabetes,” Suarez says. “Without them, I may not be here today.”