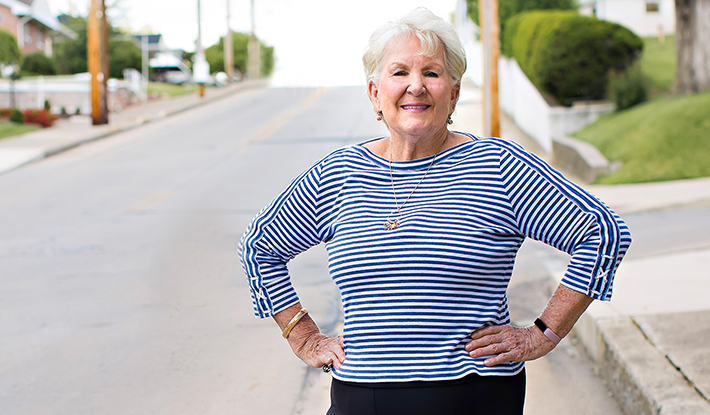 “Last year I was huffing and puffing, and I couldn’t walk and talk at the same time,” recalls the 76-year-old grandmother, who previously enjoyed walking the hills of her hometown with friends. However aortic stenosis, a narrowing of the aortic valve, prevented the valve from opening and closing the way it should, causing breathlessness and fatigue. She knew her valve was failing and needed replacement, but hoped to avoid having to undergo open heart surgery.

However, she read that TAVR was for patients only with other serious medical conditions that made surgery too risky for them. Other than high blood pressure and the bad valve, Marakovits was in good shape and felt she likely wouldn’t be a candidate for the TAVR procedure.

Her luck changed during pre-surgery tests at LVHN. Research nurse Kristen Cornell told her about a study testing the value of TAVR for low-risk patients, like Marakovits, and asked if she wanted to enroll in it. Cornell didn’t have to ask twice.

On Nov. 10, a team led by William Combs, MD, Marakovits’ cardiologist with LVPG Cardiology, and cardiothoracic surgeon Timothy Misselbeck, MD, with LVPG Cardiac and Thoracic Surgery, threaded a new valve comprised of pig tissue and metal through a catheter inside Marakovits’ diseased valve.

Just three weeks after the TAVR procedure, she walked three miles with friends around New York City. “I kept up with them,” Marakovits says. “It was wonderful!”

Then she laced up her walking shoes and took on the “Tennie” to really test her fitness level.

“I feel fortunate that I had the TAVR procedure,” she says. “I couldn’t have done without it.”

Could TAVR help you? Learn more about TAVR.