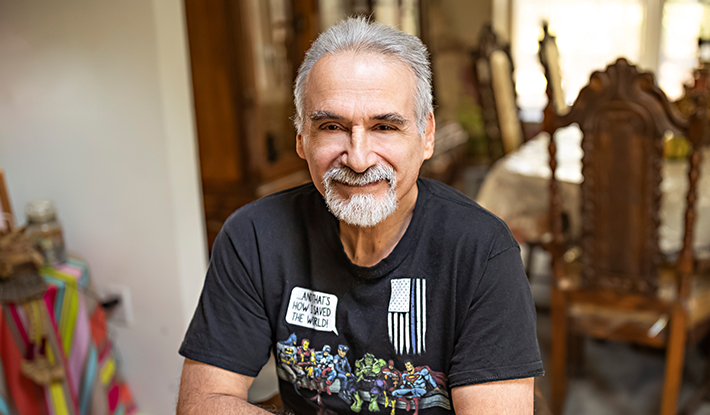 For 20 years, John Loguercio faced danger on a daily basis as a New York City detective. When he finally retired, he sighed with relief, knowing that he was safer puttering around his Milford, Pa., home than he was tooling around the streets of the Big Apple.

But as it turned out, June 6 – an average morning that included a 1-mile walk, workout with weights and grass-cutting perched on his riding mower – proved more dangerous than anything he encountered in law enforcement.

“I had lunch and got a pain in the middle of my chest,” Loguercio says. “I thought it was heartburn. My wife asked me if I wanted her to call 911, but I said, ‘No, it’s heartburn.’

“It’s not uncommon for people to confuse chest pain with heartburn, and at age 70, Loguercio felt like he was in good health. He was not overweight; he exercised routinely; he had no family history of heart issues; and his blood pressure and cholesterol were being treated. He had, in fact, never been admitted to a hospital.

But as the afternoon unfolded, Loguercio knew he was in trouble: “The pain went from the middle of my chest to the back of my chest, and I knew I was having a heart attack. I told my wife, ‘You better call.’ But she was so worried, she already had.”

When the ambulance arrived, Loguercio lost consciousness as his condition worsened. “I understand they hit me three times with the defibrillator,” he says. An EKG confirmed Loguercio was in grave danger. The decision was made to fly him to Lehigh Valley Hospital (LVH)–Pocono via MedEvac helicopter. LVH–Pocono is the only hospital in the region approved by the Pennsylvania Department of Health (DOH) to treat high-risk heart attacks.

Team at the ready

“I was there before the helicopter,” Fried says. “As soon as it landed, they brought Mr. Loguercio straight down, wheeled him into the ER, and we looked at him right away.” Loguercio was given an antiarrhythmic medication, and the team verified that his electrocardiogram (EKG) was abnormal. He was then taken to the catherization lab.

“He had a critical blockage in the left anterior descending (LAD) coronary artery. The blockage, over 95 percent, was opened pretty quickly – within 31 minutes of arriving at the hospital,” Fried says.

An LAD blockage impedes blood flow to the front, main and left walls of the heart. As tissue begins to fail from lack of oxygenation, the result is a “widowmaker,” a heart attack so devastating that survival rates generally hover at around 1-2 percent.

With the LAD blockage cleared, Loguercio received a stent – a wire scaffolding designed to keep the artery open and facilitate blood flow.

“I can’t give enough accolades to LVH–Pocono and Dr. Fried,” Loguercio says. “I also don’t want to leave out the people in cardiac rehab – all of them, the nurses, the guys taking your blood pressure – they’ve got you monitored. They care about you. I didn’t have that much supervision since I lived with my parents. They’re absolutely great people, unbelievably great hospital.”

In assessing his own status, Loguercio is humbled. “I could’ve been around the corner doing my mile walk and dropped dead on the street,” he says. “But I’ve always had a guardian angel; he was working overtime for me that day.”

Your heart is in good hands. Learn more about the region’s best heart program. Visit lvhn.org/heartcare