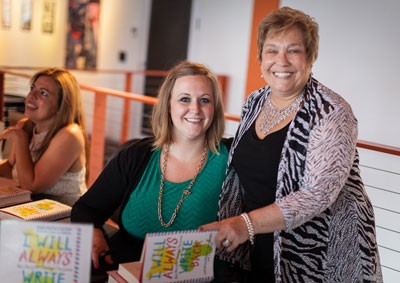 Caitlin Alifirenka, RN, was an all-American 12-year-old in 1997 when she got an incredible assignment in her seventh-grade English class. Everybody got to choose a pen pal in another country. She chose Zimbabwe because it sounded exotic compared to her small-town life in Hatfield, Montgomery County. She began writing to a boy named Martin Ganda, who lived in the city of Mutare.

Alifirenka had no idea then they would eventually become best friends, or that her experience helping him and his family would lead to a nursing career that allows her to care for people from many cultures.

“Martin opened my eyes to the rest of the world,” says Alifirenka, who works in the Emergency Room at Lehigh Valley Hospital-17th Street. “Our relationship made me more aware of cultural differences and more compassionate about what other people are going through.”

Their astonishing relationship even inspired them to write a book together. Their goal: to show teens that the world is a diverse place, and that a little kindness sometimes goes a long way.

The letters started off simple and general, detailing their favorite music (they both loved the Spice Girls) and what they liked to do (she adored going to the mall with friends, and he lived for soccer). Alifirenka assumed he was an African version of the American kids she knew, and smart too; he was the top student in his school.

But as he gradually revealed more about his life, and his letters started arriving written on pieces of trash, she realized with increasing concern that he couldn’t be more different.

His family was impoverished, barely able to survive in their one-room shack where Ganda and his four siblings slept on the floor. When he finally told her he had to quit school because Zimbabwe didn’t offer free public education and his parents couldn’t afford tuition, Alifirenka knew she had to do something.

Without telling her parents, the then-ninth-grader began stuffing her letters with babysitting money – $20 and $40 at a time. “With that simple cash I was able to get him and his siblings back in school, feed their family, and help keep them in their room,” she says.

Eventually she told her parents, who stepped in and continued supporting the family. They even helped Ganda get a full four-year scholarship to Villanova University. He graduated in 2007 after earning two bachelor degrees in four years and has since gone on to get his MBA at Duke University.

Alifirenka decided to pursue nursing as a teen when she first discovered how good it felt to help Ganda. “I knew I wanted to make a difference in people’s lives,” she says. “I specifically chose emergency room nursing because that’s when people are at their worst. Helping just one person through a terrible time is the most rewarding feeling.”

Alifirenka has a particular interest in transcultural care, something she focused on in nursing school and relishes in her daily work. “Knowing Martin has made me more aware of how to treat patients with different medical rituals – whether it’s their preference to not look them in the eye, or calling them Miss or Mister, or asking a family elder for permission to treat someone,” she says. “I love meeting these patients because they’re teaching me how to be a better nurse.”

These days, Alifirenka and Ganda are carrying their transcultural message even further with a new book about their pen pal experience called “I Will Always Write Back.” Part of the proceeds goes to the Seeds of Africa Fund, which Ganda started in Zimbabwe to help educate poor young students.

“We want kids to start embracing cultural differences and treating each other nicely,” Alifirenka says. “Doing something kind can really make an impact on someone’s life.”

She and Ganda are living proof of that.