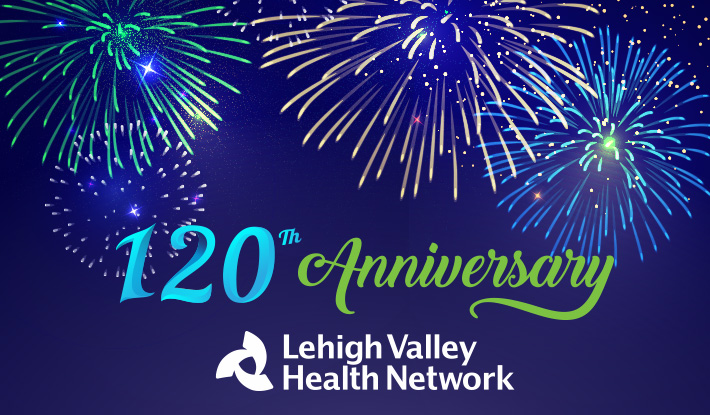 The year was 1899 when The Allentown Hospital opened its doors at what is now Lehigh Valley Hospital (LVH)−17th Street in Allentown. One-hundred-twenty years later, the health network has grown to provide care at eight hospital campuses throughout eastern Pennsylvania, numerous physician practices, health centers and ExpressCARE locations.

To mark LVHN’s 120th anniversary of its beginnings in Allentown, PPL Corporation’s landmark tower along with Three City Center site at 515 W. Hamilton St. in downtown Allentown, will be lit in LVHN’s blue and green colors over the next week. The PPL tower will display the LVHN colors beginning May 22, the anniversary of The Allentown Hospital’s opening, through May 24, while Three City Center will shine in blue and green from May 19 through the 26.

Allentown was a city of about 35,000 when the first patient, Clinton Troxell, an Easton bricklayer who fell from scaffolding, came through the new hospital’s doors in 1899. Today, the latest U.S. census shows a population of more than 121,000 ranking it the third largest city in the state.

Over the next several years, enthusiasm for the hospital waned and the project stalled. But Morning Call publisher David Miller, who established the hospital fund, continued to publicize the concept and raise money and eventually turned over $1,900. The project began to move full-speed ahead. By February of 1896, the Board was organized, the hospital chartered, and an active Ladies Auxiliary with 13 initial members was founded.

Next on the agenda was to find a suitable piece of land on which to build. Organizers settled on a very valuable piece of property that was available -- the Solomon Griesemer (a farmer and hotel operator) tract at the corner of 17th and Chew Streets. Unfortunately, the land was put up for sale with the stipulation it not be used to build a hospital. So, acting as individuals, community leaders that included Col. Harry C. Trexler, Henry Leh, Frank M. Trexler, J.H. Pascoe and Dr. C. S. Martin purchased the property and in March of 1897, transferred the deed to The Allentown Hospital Association. The land was purchased for $5,297.51 and was paid for by the Ladies Auxiliary. Money was raised in various ways, including the sale of a cookbook called “The Up-to-Date Cookbook,” which is digitally preserved by Library Services of Lehigh Valley Health Network.

Construction began in 1898 as fundraising continued. Once the hospital opened with 30-beds, the staff cared for 18 patients a day the first year. That number grew to a peak of 102 patients a day during the first ten years to almost 8,000 patients, which lead to several additional expansions.