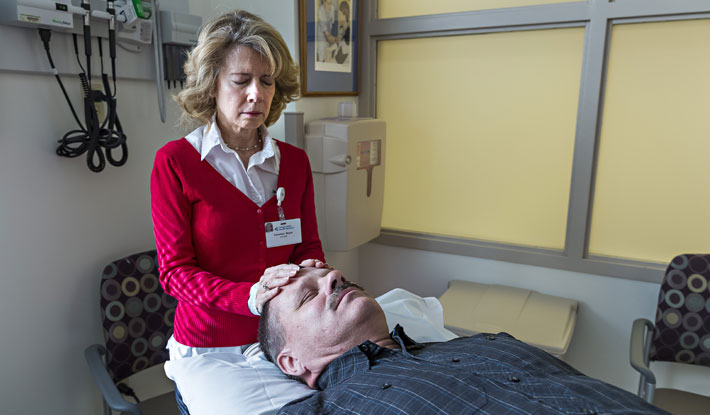 While undergoing treatment for pancreatic cancer, Doug Geisner, 57, a retired Lehigh Township police officer, experienced lower back pain, especially at bedtime. It’s a common side effect of the major surgery Geisner had, known as a Whipple procedure.
“We removed the gallbladder, bile duct, head of the pancreas and the duodenum, then reconstructed the gastrointestinal tract,” says surgeon Jeffrey Brodsky, MD, with LVPG Surgical Oncology.

Successful treatments
Chemo-related fatigue also was zapping Geisner’s energy. “I was taking at least two naps a day,” says the Cherryville resident. To help him feel better, Geisner’s wife, Kathleen, made him an appointment for Reiki (pronounced ray-key), which is available free to Lehigh Valley Health Network (LVHN) patients with cancer.
“Reiki took away the pain and gave me energy,” says Geisner, who had several one-hour treatments. “For two to three weeks after every treatment, I didn’t have to take a nap,” he says.

A light touch
Reiki is a Japanese-inspired, lighttouch manual therapy technique. “It’s based on the idea that there’s life-force energy that runs through all living things,” says Ronnie Boyer, a Reiki master who practices Reiki at Lehigh Valley Hospital (LVH)– Muhlenberg and LVH–Cedar Crest.

Here’s how it works:
A Reiki practitioner like Boyer places her hands lightly on seven main energy centers, or “chakras,” of the body: head, neck, shoulders, upper chest, abdomen, legs and feet, spending three to five minutes at each spot. “The energy can get stuck. We try to get the energy to flow where it needs to go,” Boyer says.
Reiki can have a relaxing effect and promote self-awareness, inspire creativity, reduce stress, and create a sense of harmony and well-being. “Patients say they feel better,” says Kathleen Sevedge, RN, director of LVHN Cancer Support Services. She launched the volunteer-supported Reiki program at LVHN in 2016.
Geisner, who is now cancer-free, was skeptical until he tried it. Now, he’s a believer. “I would recommend Reiki for anyone. If it works for others even half as well as it did for me, it’s worth a try,” he says.