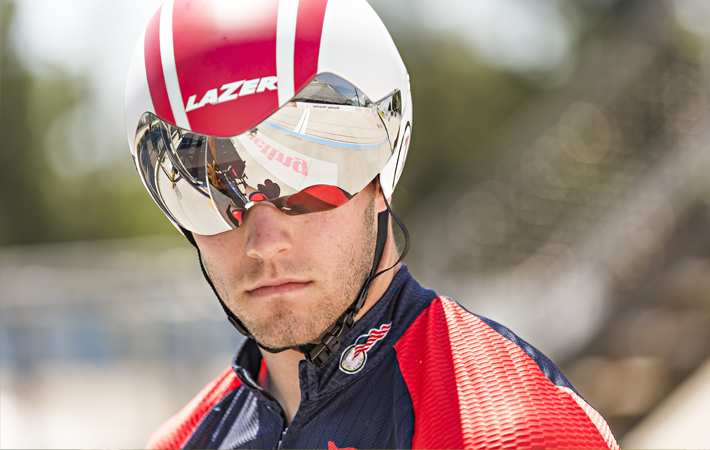 On the road to representing the USA in track cycling at the upcoming 2016 Summer Olympics in Rio de Janeiro, Matt Baranoski has experienced his share of bumps. One in particular stands out.

“I knew it wasn’t good as soon as I went over my handle bars,” says Baranoski, 23, of Perkasie, recalling a crash that broke his left collarbone in a men’s keirin race during the 2012 World Series of Bicycling at the Valley Preferred Cycling Center (VPCC) in Trexlertown.

“Somebody made a stupid move, and I knew I was in trouble because in the crash I fell to the left,” Baranoski says. “In track cycling crashes, which are fairly common, riders usually fall to the right.”

Lehigh Valley Health Network orthopedic surgeon Neal Stansbury, MD, with LVPG Orthopedics and Sports Medicine, has served as the VPCC’s medical director for a decade. He saw Baranoski’s crash that night and immediately raced to his side. “I felt badly for him, especially because I knew he had nationals coming up in less than a month,” Stansbury says.

The accident left Baranoski’s shoulder in multiple pieces. “It shattered rather than a clean break, which is typical in cycling crashes,” Stansbury says. He used titanium screws and plates to repair the injury, and Baranoski was discharged from Lehigh Valley Hospital–Cedar Crest in a matter of days. From that point it was a matter of what the world-class cyclist could tolerate while on his bike.

“Fortunately, this was cycling, not tackle football,” Stansbury says. “The biggest strain on the injured area would be Matt’s pulling on the handle bars, and the plates would easily withstand that. Another crash would have been a risk, but this is one tough kid. He’s an incredible athlete, and this wasn’t going to hold him back.”

“Dr. Stansbury kept me to two races at collegiate nationals,” Baranoski says. “We taped up my shoulder so much that I felt my left arm was kind of just along for the ride. It was tough to grab the handlebars because they felt too narrow for me in that condition. But I got used to it as I went along and I ended up winning the kilo (1-kilometer time trial) with my personal best time.”

A week later, Baranoski competed in the keirin, team sprints and kilo at the Elite Nationals, winning the latter two events. He’s won a total of 14 national championships since 2013. Last year, he earned a bronze medal in the keirin in the UCI Track World Cup held in New Zealand.

Now he takes aim at his first Olympics. Track cycling events will be held Aug. 11-16, and Baranoski is considered the nation’s best rider in the keirin (a 2-kilometer sprint race that starts behind a motorized pace vehicle and ends with a 700-meter sprint to the finish).

“This is going to be an amazing experience,” Baranoski says. “It’s the culmination of everything I’ve done since I began in the velodrome developmental program when I was 6-years-old. Every Olympic rider I’ve talked to says I’ll never forget the opening ceremonies, when you walk out with the USA team behind the flag. I’m going to cherish every minute in Rio.”

He also is unconcerned about the risk of the Zika virus, unlike a few other athletes who withdrew from the games. “During the games it will be winter, so I’d imagine there won’t be as many mosquitos to begin with, and bug spray should almost eliminate the problem,” he says. “Of all the 7,000 athletes we’ve sent for test events in Rio no one contracted the virus, so I don’t think it will be a big problem.”

After the games, Baranoski will return to Penn State to complete his degree in electrical engineering. Where his cycling career goes from here, he’s not certain.

“I don’t think I’ve peaked yet,” he says. “I still have the desire to compete. Will my body hold up until the 2020 Games in Tokyo? We’ll see what happens.”