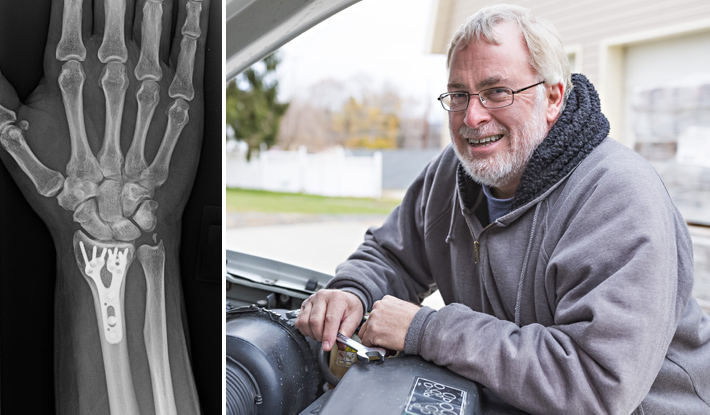 The moment Dennis Yoo went down in a heap in the driveway outside his Whitehall, Pa., home, he knew he had a problem.

“I knew I broke something as soon as I hit the ground,” says the 60-year-old Yoo, who had been in the process of changing the breaks on his pickup truck when he walked around the front to get a part and tripped over a jack handle on the other side.

“I landed on my right wrist and my right shoulder banged against the garage door track,” Yoo says. “When I went to get up I was cursing myself. I couldn’t believe it happened.”

A short time later, Yoo was in the Lehigh Valley Hospital–Muhlenberg emergency department getting X-rays on what would be diagnosed as a broken wrist, as well as treatment for lacerations on his shoulder. He scheduled an appointment to see Lehigh Valley Health Network orthopedic surgeon Paul Sibley, DO, of LVPG Orthopedics and Sports Medicine, who specializes in hand surgery.

“I saw him two days after I fell and I had wrist surgery four days later,” Yoo says. “Friends of mine were amazed it all came together so quickly.”

Yoo had broken the lower part of the radius at the wrist and chipped off the tip of his ulna.

“Like most people who break a wrist, Dennis fell on an outstretched hand,” Sibley says. “The force from the hyperextension created the break. Every injury of this type has a personality of its own. This one involved the joint and the bone was angulated backwards, so we corrected this deformity using certain techniques.”

Yoo says Sibley gave him several options, including those that didn’t involve surgery. But being this was Yoo’s dominant hand, Sibley recommended surgery in order to align the damaged bones as closely as possible to before the injury.

“He was very thorough in explaining everything, and I really appreciated that,” Yoo says. “The surgery option required the least amount of downtime for me. I could have chosen just to have a cast put on it, but that wouldn’t have addressed the alignment.”

The procedure lasted about an hour and Yoo was discharged the same day. The following week, he began rehabilitation with LVHN occupational therapist Betsy Green of LVH Rehabilitation Services–Cetronia Road.

“It’s important to get started with rehab as soon as you can to work out swelling issues, soft tissue tightness and promote hand movement again,” Green says. “Dennis had a good amount of swelling from the soft tissue damage but we were able to get him working on moving his fingers right away. This helped decrease the swelling.”

Green was able to transfer Yoo from the rigid cast he received after surgery to a custom-molded plastic splint, which allowed for more finger movement and functional hand use. It wasn’t long before he was working on the entire wrist and forearm. Yoo finished his rehab sessions with Green at the end of October.

“Betsy gave me home exercises which I still do,” Yoo says. “Most of the mobility has already come back, and I’m back to doing most everything I was doing before, although I will admit I had to let my wife finish up the breaks on the truck.”

Yoo offered his praise for both his surgeon and therapist.

“I had heard Dr. Sibley was one of the best in his field and he certainly proved that to me,” Yoo says. “And Betsy was so helpful in getting me back so quickly. I couldn’t have been in better hands.”