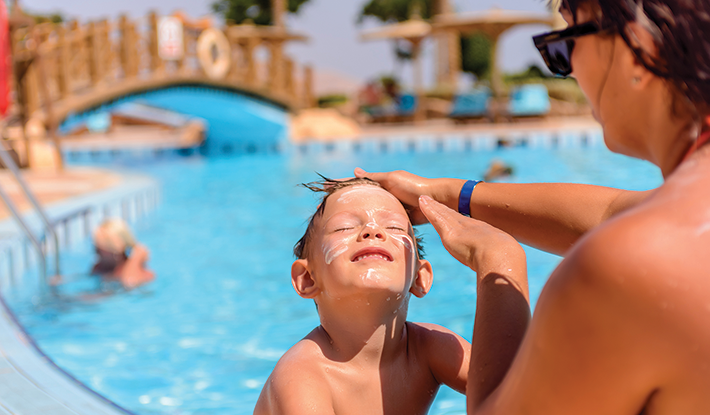 It’s no surprise that accidents happen during summer activities, even when you’re trying to be careful. “Because we’re outside more and the days are longer, summer can be a more dangerous time,” says Colleen Kennedy, MD, medical director at Lehigh Valley Hospital (LVH)–Pocono.

Fortunately, turning your summer into a safe zone can be just a matter of taking a few precautions. Here are some of the most common summer mistakes Kennedy treats as an emergency department physician – and how to avoid them.

Slip-up: Riding your bike without a helmet

A bike helmet is the single most effective way to prevent the head injuries that can result from a bicycle crash, according to the U.S. Department of Transportation.

Play it safe: If you’re going bike riding, make sure everyone – you included – is protected with a properly fitted helmet. “There’s no downside to it,” Kennedy says.

To protect yourself from sunburn, select a broad-spectrum sunscreen, which protects against the sun’s harmful rays, with a sun protection factor (SPF) of at least 30. Reapply every two hours and after swimming or using a towel.

Play it safe: Don’t wait until you feel hot. “You can get a sunburn without even knowing it as well as on a cloudy day,” Kennedy says. Wear protective clothing too, such as a beach cover-up. When you can, avoid going out in the sun from 10 a.m. to 4 p.m., when UV rays are strongest. Sun protection is important, no matter your complexion.

If you run out of lighter fluid for your charcoal grill, go to the store for more. “Don’t pour gasoline on the coals,” Kennedy says. Gasoline is more flammable than charcoal starter fluid and can easily cause burns.

Play it safe: Cool down hot coals before disposing of them by dousing with a garden hose or a bucket of water after cleaning out the grill. Even if the coals don’t seem hot, they can retain their warmth for hours. “One man who put cooled coals in the trash on his deck, woke up to a fire,” Kennedy says. “When he ran outside, he fell through the deck, sustaining burns and trauma from the fall.”

“Dehydration is a big problem in the summer, especially among those who are outside all day, such as kids, boaters, landscapers, roofers, gardeners and homeowners doing yardwork,” Kennedy says. Drink lots of water early and often.

Play it safe: Carry a water bottle with you and drink up even if you don’t feel thirsty. “Stay ahead of dehydration. Once you’re thirsty, you’re already behind,” she says.

For more information about staying safe this summer, or to schedule an appointment with a primary care provider, call 888-402-LVHN (5846).