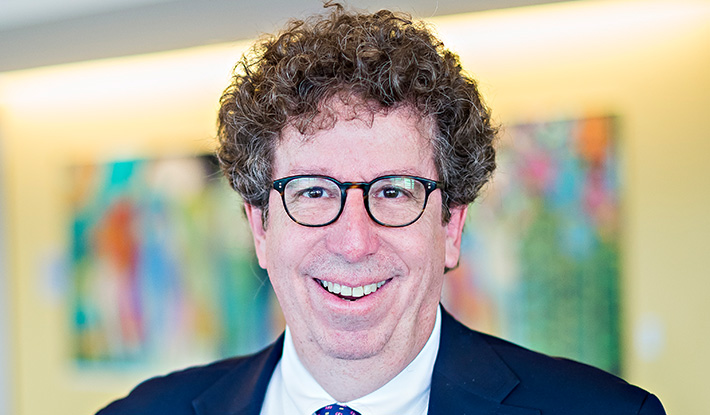 Steven L. Lewis, MD, Chief of the Division of Neurology at Lehigh Valley Health Network (LVHN), has been awarded the 2019 A.B. Baker Award for Lifetime Achievement in Neurologic Education by the American Academy of Neurology (AAN) for his career contributions to the field. Lewis received the prestigious honor on May 8 during the 2019 AAN Annual Meeting, held in Philadelphia at the Pennsylvania Convention Center. This national award, which is given to only one neurologist in the country annually, recognizes significant career-long achievements in neurologic education, with an emphasis on national accomplishments.

“It is an incredible privilege and honor to be this year's award recipient, especially following in the footsteps of the renowned neurologists from the most prestigious institutions and neurology programs around the country who have received this award since its inception,” Lewis said. “I want to thank the AAN’s A.B. Baker Award Workgroup for the honor. I also want to thank the AAN for providing me with so many opportunities in national neurologic education, to the many residents with whom I have so enjoyed learning, and to my patients, who teach me so much. I also want to thank Lehigh Valley Health Network for its strong support of neurologic education. The fact that I am receiving this award while serving as Chief of Neurology at LVHN is a particular privilege and honor for me.” Lewis assumed his role at LVHN in August 2017. Lewis spent the first 30 years of his career in Chicago in the roles of clinician, administrator, educator, and writer/editor. While in Chicago, Lewis served as associate chair of the Department of Neurological Sciences at Rush University Medical Center, as well as Head of the Section of General Neurology and the Neurology Residency program director.

After earning his undergraduate degree in molecular biophysics and biochemistry at Yale and his medical degree at Stanford University, Lewis completed a neurology residency at the University of Chicago, where he served as chief resident. He is board-certified in neurology.

At LVHN, he is leading the expansion of the Division of Neurology into a national referral center for clinical care, neurologic education, and clinical research.

Lewis is the Editor-in-Chief of the journal, Continuum: Lifelong Learning in Neurology, the official continuing medical education journal of the American Academy of Neurology. He is past chair of the Neurology Residency Review Committee of the Accreditation Council for Medical Education (ACGME), the committee that oversees the program requirements and accreditation of every neurology residency in the United States. He is a current director of the American Board of Psychiatry and Neurology, and is an elected trustee of the World Federation of Neurology (WFN) (and the first American elected to serve as a WFN trustee since 2008) where he also chairs the WFN Education Committee.

Lewis has written and edited several medical textbooks, including being editor for two editions of the Neurology Book for the Medical Knowledge and Self-Assessment Program (MKSAP) of the American College of Physicians. He has been frequently published in peer-reviewed journals, is the Teaching Course Chair of the World Congress of Neurology to be held in Dubai, United Arab Emirates in October 2019, and has educated doctors around the world on various topics relating to neurology and neurologic education.

LVHN Neurology has a long history of providing complex inpatient and outpatient neurological care, including the major neurological subspecialty areas of epilepsy, headache, movement disorders, multiple sclerosis, neurocritical care, neuromuscular diseases, neuro-oncology, neurophysiology, and vascular neurology. LVHN neurology has multidisciplinary programs including programs in acute stroke, telestroke, teleneurology, an ALS Association Recognized Treatment Center, and its unique neurocardiology, and neurology and pregnancy programs. LVHN’s Joint Commission-Certified Comprehensive Stroke Center was accredited in 2012 as the third Comprehensive Stroke Center to be certified in the nation and the first in Pennsylvania, and the Mobile Stroke Unit is the first in Pennsylvania. State of the-art neurocritical care is provided in LVHN’s dedicated 14-bed Neuroscience ICU. LVHN provides training to the next generation of neurologists in its ACGME-accredited neurology residency training program, and in April 2019, LVHN Neurology received additional accreditation by the ACGME to provide subspecialty training in stroke to neurologists in its Vascular Neurology fellowship program.