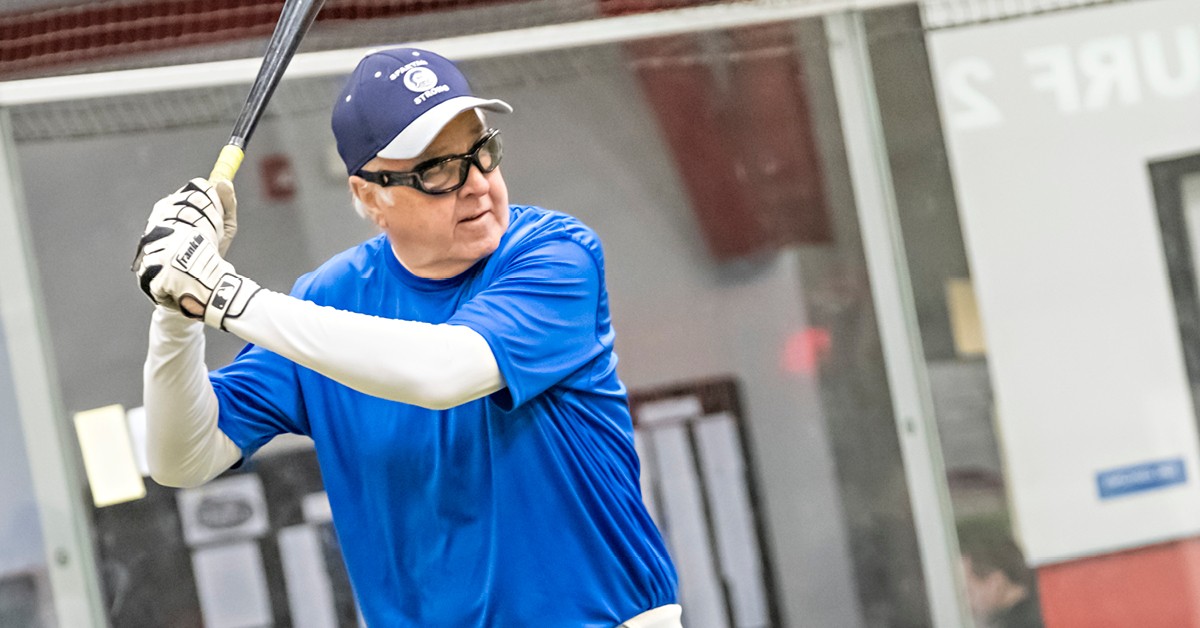 Kidney cancer has been a part of Vincent ‘Bill’ Ambrulavage’s life for over seven years. Ambrulavage, an avid softball player, says he was shocked when he first learned of his diagnosis because he didn’t experience any pain. “The only thing I noticed was blood in my urine. I went to a urologist and he did an MRI and found a tennis ball sized tumor on my kidney,” says Ambrulavage.

Ambrulavage was diagnosed with stage 3 kidney cancer and while he needed his right kidney removed, no further treatment was needed. However, his doctor cautioned the cancer could return and he would need imaging every six months.

For nearly two years, Ambrulavage went about his life normally and even went back to his competitive softball league. However, that normalcy came to an end when his urologist called to let him know that his cancer returned.

This time the cancer had spread to his abdomen, chest, lungs and adrenal glands, which meant it was stage 4. He was referred to Suresh Nair MD, Physician in Chief, Lehigh Valley Cancer Institute.

Nair went over the reality of Ambrulavage’s situation and recommended a clinical trial. “We automatically screen all cancer patients for clinical trials at Lehigh Valley Cancer Institute. We have access to over 150 clinical trials right now, among the most of any academic community hospital in the country. Bill was the perfect candidate for a trial we were doing at that time testing a new immuniotherapy drug against the standard of care,” he says.

Ambrulavage agreed with Nair’s recommendation to participate in a clinical trial. “I figured that even if it didn’t help me, maybe it could help someone else down the line,” he says.

Ambrulavage started on a drug called SUTENT, an oral medication that he only needed to take once a day. The only side effect that he experienced during the trial was some mild shortness of breath, but not enough to affect his everyday life. Nair was pleased to see that the medication reduced the size of the tumors.

Because the medication was oral, Ambrulavage was able to continue living a fairly normal life and even play sports.

While the SUTENT initially reduced the size of the tumors, after three years Nair felt that Ambrulavage’s response had plateaued and would be better served switching to another clinical trial of a drug called OPDIVO (Nivolumab).

OPDIVO is an immunotherapy drug administered intravenously. Ambrulavage says he only had to go for infusions once every few weeks and the infusions were generally around 45 minutes.

Within 90 days the size of Ambrulavage’s tumors shrank by 85%. “The results were amazing. We just couldn’t believe it,” said Ambrulavage.

“We are at a place now where patients have so many more options than the currently approved FDA approved options. Some of the clinical trials are going to become the cures of tomorrow and patients in the Lehigh Valley are getting a first crack at them, right here in our area, without having to travel,” says Nair.

Ambruvalage has been in remission since May 2019 and says he feels better than he has in years. He is no longer on medication as part of the trial and affectionately refers to Lehigh Valley Cancer Institute as his ‘home team’. “It’s only eight miles from where I live and they have all the necessary equipment for patients. Instead of driving to New Jersey, New York or Philadelphia, we have the best right here at home,” he says.

Learn more about Bill Ambruvalage’s journey with kidney cancer by watching this video:

For more information visit LVHN.org/BPH or to schedule an appointment call 888-402-LVHN (5846)