Syrian Immigrant Finds Meaning as a Medical Interpreter at LVHN

She fled a war-torn country to a new home in Allentown, PA 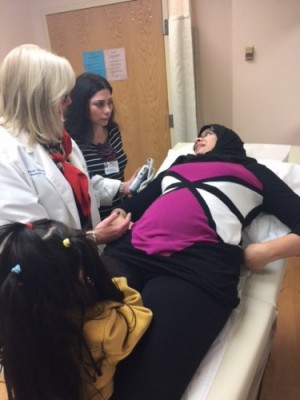 Nisreen Saadia planned a career teaching English and French to her fellow Syrians at the University of Damascus, the same university she earned double master’s degrees in education and linguistics and dual bachelor’s degrees in English/Arabic translation and French literature. Her dream was derailed in 2013 when the Syrian government shuttered the university and she lost her job.

Encouraged by her parents to flee the country for her safety, Saadia escaped to Allentown to live near family. Allentown’s Syrian population is one of the largest in Pennsylvania.

“It was hard being new in the U.S., and I was desperate to work,” Saadia says. Soon she found an outlet for her linguist skills, teaching at Allen and Dieruff high schools in Allentown and at Lehigh Carbon Community College in Schnecksville. She also volunteered at Lehigh Valley Health Network (LVHN) as a medical interpreter for Arabic-speaking patients.

LVHN provides medical interpretation services for patients who may have a limited understanding of English, as well as for those who are deaf or hard of hearing. The health network employs seven Spanish-speaking interpreters and has a team of 85 language volunteers who meet the needs of a multicultural community. Interpretation occurs face-to-face or using technology, such as a tablet computer or telephone. LVHN offers medical translation from more than 200 languages. The top 4 are:

Since starting as a volunteer interpreter, Saadia estimates she has interpreted for a dozen patients at LVHN.

One is 31 year old Kheira Mokeddem who is expecting a baby in the spring. The mother of two recently moved to Allentown from Algeria and receives pregnancy checkups at the Center for Women’s Medicine where Saadia interprets for her.

Mokeddem says Saadia helps bridge the communication gap between her and her caregivers. “I feel very comfortable, and she makes it easier to for me to navigate the system and ask any questions I have,” Mokeddem says. “Before Nisreen, it was hard to communicate since there is a lot going on in one visit, and it is particularly difficult when you don’t know the language.”

On a recent visit, Mokeddem cried tears of joy when Saadia translated ultrasound results: “Congratulations, you’re having a boy.” The parents of two daughters, Mokeddem and her husband say they already have two princesses and can’t wait for their prince to arrive.

In another instance, a Middle Eastern woman who spoke little English was in labor at Lehigh Valley Hospital–Cedar Crest and needed an emergency cesarean section. Saadia was called in to interpret for the woman and the operating room (OR) staff.

Obstetrician/gynecologist, Patricia Maran, MD, with the Center for Women’s Medicine, delivered the baby and credits Saadia for her communication contributions in the OR. “Interpreters are an integral part of the team,” Maran says. “When decisions need to be made for and by the patient – especially when there are complications – it’s even more vital for doctors and patients to be able to communicate.”

Saadia remained with the mother after the birth of her daughter, supporting and reassuring her until the woman’s husband returned to the hospital. “I feel human when I help people,” she says.

Syrian Immigrant Finds Meaning as a Medical Interpreter at LVHN