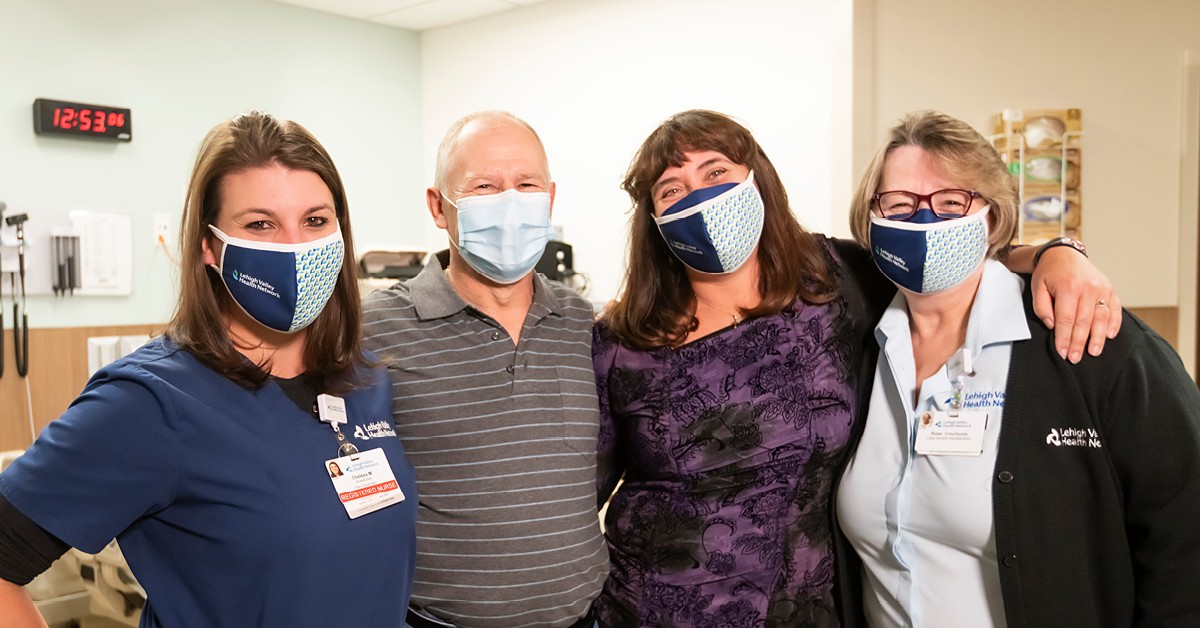 Before he began having classic symptoms that fairly screamed “heart attack,” John Daley of Schuylkill Haven merely felt an uneasy sense that something wasn’t right. “It didn’t feel painful, didn’t feel tight, didn’t feel like heartburn,” he says. “It just felt weird.” He had no reason to expect a heart attack. He’d been fishing the week before, carrying a marine battery and hand-cranking his 17-foot flat-bottomed jon boat onto its trailer, no problem.

Unsure what to think, the 59-year-old retiree decided to ask his wife, Kelly Daley, RN, a nurse on the medical-surgical floor at Lehigh Valley Hospital (LVH)–Schuylkill E. Norwegian Street. While heading there to see if she’d recommend seeking care, it became clear that he would need help from every link in a chain of lifesaving moments.

Halfway to the hospital at a stop sign next to a cemetery, John realized that whatever was happening was getting worse fast. He found it difficult to breathe. Pain started radiating down his left arm. “I thought, ‘Damn, maybe I’m having a heart attack,’” he says. He stepped on the accelerator and careened to the hospital, where he parked and went to the third-floor reception desk to ask for Kelly.

“He wasn’t in good shape,” says guest services representative Rose Crochunis, who greeted John. “He was having chest pain, looked grayish, was sweating, was bent in half and looked ready to fall over, to be honest with you.” When John asked for his wife, “I thought, ‘No, uh-uh,’” says Crochunis, whose husband had died of a heart attack 20 years earlier. Instead she dashed for a wheelchair. “Have a seat,” she told John. “I’m taking you to the ER and we can call Kelly from there.”

Kelly was starting her rounds when Crochunis called. “Rose cared enough to get him the help he needed,” Kelly says looking back at that critical moment.

Most of Kelly’s 28 years as a nurse has been spent in heart medicine. After arriving at the ER, she quickly assessed John’s pallor, sweating, weakness and difficulty breathing, along with the drugs being administered and the electrocardiogram (EKG) results confirming a heart attack. A MedEvac flight to LVH–Cedar Crest already had been called. “I knew he was in trouble,” she says.

She grappled with the thought of following John to the Allentown hospital where her first husband had died in 2006. “The smart half of my brain told me John was going to the best place, and it was not the same situation,” Kelly says. “But my heart said, ‘Oh my God, oh my God, oh my God.’”

ER nurse Chelsea McHugh, RN, could see her colleague struggling. “Kelly was being a typical nurse, trying to act under control and asking the right questions, but I realized how vulnerable she felt,” McHugh says.

Kelly hesitated to leave John even to make arrangements to leave work and hit the road for Allentown. She and McHugh locked eyes. “She said, ‘He’ll be OK – I won’t let anything happen to him,’” Kelly says. “That meant the world to me – and she kept her word.”

About 25 minutes after arriving at LVH–Schuylkill, John was on a helicopter bound for the catheterization (cath) lab at LVH–Cedar Crest. “It made me calm to see how everybody had their place and knew what to do,” John says.

Upon John’s arrival at the cath lab, board-certified interventional cardiologist Bryan Kluck, DO, understood the problem: John’s left anterior descending (LAD) artery was 100 percent blocked, cutting off blood supply to a large portion of the heart. “It’s very serious,” Kluck says. “They used to have a name for [LAD occlusion]: ‘the widow-maker.’ We’ve learned not to associate it with those terms, but that gives you sense of the gravity of having that artery blocked, especially blocked abruptly.”

Fortunately, John’s blood pressure was strong, which saved time as the Lehigh Valley Heart Institute team directed a catheter to the blockage site, opened it with a tiny balloon and installed a mesh-like stent to keep the artery open, a procedure known as a balloon angioplasty.

John survived and dedicated himself to cardiac rehabilitation sessions three days a week, along with eating a better diet and easing off strenuous activities. “I can still do things, I just need to take my time,” John says. Since his heart attack, his heart’s ability to eject blood has substantially improved from an impaired state to within the normal range.

John and Kelly now can even joke about his near-death experience, which coincided with their two-year wedding anniversary.

John laughs. “You can see how hard she’s been on me in two years.”