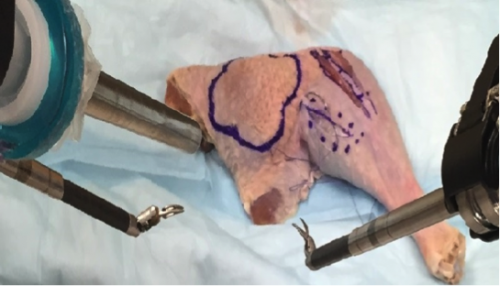 You’ll find it in sandwiches, soups, stews, and even bacon and hot dogs. And of course, it’s been a Thanksgiving staple for years. But if you think we’ve run out of new ways to use turkey, don’t expect the robotic surgery team at Lehigh Valley Health Network (LVHN) to agree.

Due to its expertise and high patient volume (more than 6,000 robotics cases), LVHN was one of 14 institutions across the United States and Europe selected to participate in a research study to evaluate robotic surgery training methods. Current methods include a variety of virtual reality simulators as well as synthetic tissue substitutes such as rubber, latex and foam. The study sought to determine if one method is clearly superior and a worthy industry standard. The study team’s biggest challenge was objectively measuring baseline surgical skill – without using an existing training material. The solution? Turkey legs.

“Turkey offered the best combination of availability and resemblance to human tissue,” says robotic surgery physician assistant Kyle Langston, PA-C, who also is LVHN’s lead investigator for the study. “Here in the Lehigh Valley, Jaindl is synonymous with turkey.”

When gynecologic oncologist Martin Martino, MD, medical director of LVHN’s minimally invasive robotic surgery program, reached out to Jaindl Turkey Farms for help, the response was immediate and enthusiastic. “We were thrilled to assist with this project,” Jake Jaindl says. “We have a great working relationship with LVHN, and this was a unique and important opportunity for us to work together.”

What’s it like performing surgery with a robot? Imagine the classic arcade game where kids use a joystick and claw to scoop up plush toys and fake jewelry. But instead of grabbing fist-sized objects, surgeons have to manipulate the robot’s ”hands” to perform delicate maneuvers such as cutting, suturing and tying knots around tiny blood vessels. The more realistic the training, the quicker surgeons can become experts. That’s why ordinary turkey legs plucked from a grocery store shelf just wouldn’t cut it.

“We needed ‘uncleaned’ turkey that still had the blood vessels intact,” Langston says. “The pieces also had to include both a leg and thigh together. Jandl Farms came through for us by donating 70 legs that met our precise requirements.”

The study took place from February to December 2015. Among the institutions joining LVHN were Duke University Medical Center, Baylor University Medical Center, University of Athens (Greece) Medical School and Imperial College of London. Novice robotic surgeons at each site used the turkey legs to measure their baseline skills with the robot before undergoing training with one of the established tools. After training, it was back to the birds to see how far their skills progressed. The study results are being tabulated and will be published later this year.

For some participants, the idea of operating on turkey was a bit unnerving.

“My initial reaction was a grimace,” says LVHN obstetrics and gynecology resident Victoria Lawn, DO. “I haven’t eaten meat in almost 10 years, so I really didn’t know what to expect. It turns out turkey is definitely more representative of human tissue than the synthetic materials we typically use in our simulation lab. I found I had to use my instruments more delicately.”

“I was excited when I heard about the turkey,” Cacciola says. “Practicing on a turkey leg sounded much better than plastic or foam or a simulator due to the real skin, muscle and blood vessels. That was definitely the case, and it would be great if we could use turkey legs more often.”

Langston says that’s not likely. “Due to high costs and storage challenges, turkey isn’t practical as an everyday training tool,” he says. “On the other hand, it’s perfect for specific applications like our study.” The findings from that study are still to be determined, but this much is certain. Whether it’s an operating table or dinner table, you can’t go wrong with turkey.