3 Things You Need to Know About Vaping

E-cigarettes are more harmful than many teens and parents realize 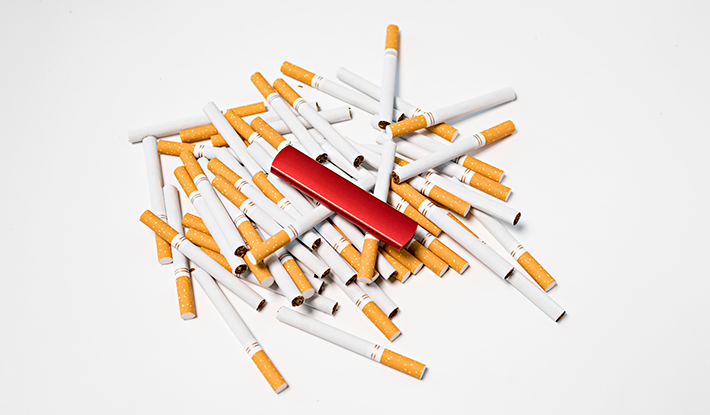 Most teens know that tobacco use is dangerous, and according to the Centers for Disease Control, youth cigarette smoking has plummeted. Unfortunately, a new danger has arisen in its place: vaping, or use of electronic devices such as e-cigarettes.

“These products vaporize a liquid to produce an aerosol that can be inhaled,” explains adolescent medicine pediatrician Rosa Gomez DeJesus, MD, with LVPG Adolescent Medicine–17th Street.

Devices come in many sizes, shapes and formats. Some resemble regular cigarettes but others look like pens or USB flash drives so they’re easy to disguise. Some produce smoke-like clouds of vapor but others minimize exhaled aerosol so a kid can vape without being obvious.

Liquid cartridges often come in flavors, making them especially – and increasingly – appealing to kids. E-cigarette use among high school students jumped 78 percent between 2017 and 2018, according to the U.S. Surgeon General. One in five high schoolers and one in 20 middle schoolers now use these devices.

“These figures are eye-opening and reflect what we see in our communities,” says family nurse practitioner Mary Jane Hanson, CRNP, PhD, with LVPG Family Medicine–Albrightsville. “A few years ago we didn’t screen for e-cigarette use, but we do now,” Hanson says.

“There’s a misperception that e-cigarettes are safer than regular cigarettes, but that’s not the case,” Hanson says. E- and regular tobacco cigarettes both deliver highly addictive nicotine – and e-cigs may have more. A typical cartridge for one of the most popular electronic delivery devices contains about as much nicotine as an entire pack of 20 cigarettes. “Some kids think they’re just using flavored liquid,” Gomez DeJesus says. “They don’t even know nicotine is in these products.”

Developing that pathway through vaping can leave youth more prone to addiction from other drugs or additional sources of nicotine, including tobacco. “Young people who start experimenting with e-cigarettes are six times more likely than non-using peers to eventually end up smoking regular cigarettes,” Hanson says. Some youth use e-cigarettes to inhale marijuana.

Aerosols from e-devices may lack tar and other carcinogens found in tobacco smoke, but they contain dangerous substances of their own. These include heavy metals such as lead and nickel; volatile organic compounds such as benzyne, found in car exhaust; ultrafine particles that go deep into lungs; and flavoring chemicals such as diacetyl, a chemical linked to lung disease.

“We lack long-term data, but there are indications that vaping causes lung damage, decreases your ability to fight infection, triggers coughing and throat irritation, and may increase cancer risks,” Hanson says. Other harms have included burns from batteries catching fire and children ingesting poisonous liquid from cartridges.

3. Parents should talk to kids

While many parents caution children about risks from tobacco, drugs and sex, vaping tends to be off the radar. “Most parents don’t know what the devices look like or what kids are exposed to,” Gomez DeJesus says. “Without a conversation at home, curious kids who think e-cigarettes are safe are likely to try one.”

Start by asking what your child knows about vaping or “juuling”– a term derived from a popular e-cigarette brand. “Start a conversation, not a lecture,” Gomez DeJesus advises. Explain what you’ve learned about risks and express concern rather than laying down the law.

If you’re a current tobacco smoker, bolster your case by quitting – but without using e-cigarettes as a substitute. “Studies indicate that vaping doesn’t help smokers quit, and it’s not an FDA-approved cessation aid,” Gomez DeJesus says. “Work instead with your primary care physician, who can prescribe nicotine patches or medication.”

Concerned about your child and vaping? Schedule an appointment with your child’s primary care provider. Call 888-402-LVHN (5846).

3 Things You Need to Know About Vaping