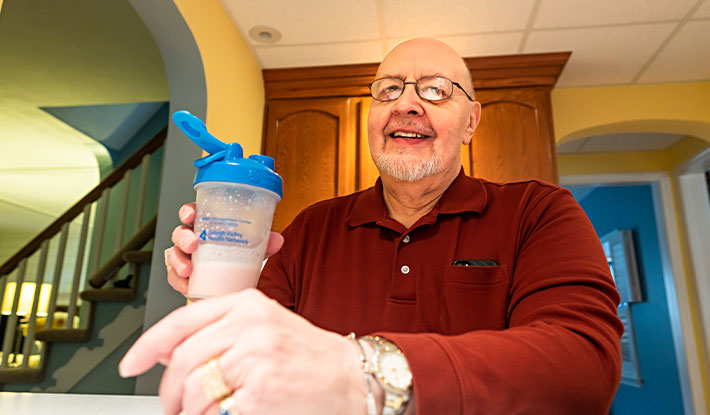 Werley Weighs In: Phase One

Follow Gene Werley (aka Early Werley) on his journey to health.

It was the mid-80s. Your alarm radio clock would sound at 6 a.m. sharp, and Early Werley’s voice would come through the radio waves. It’s something a lot of us remember. He was a Lehigh Valley staple. With radio days behind him, Gene Werley is now enjoying retirement.

While working at radio stations, Werley’s weight fluctuated. “On air, I would be teased about eating doughnuts and what have you,” he says. “I tried diets and would have success. I was also on the go constantly.” When Werley started experiencing personal stress, that’s when the weight got out of control.

“My close friend passed away and emotional eating returned,” Werley says. “I had stepped away from work, and all my personal hobbies, like writing songs, don’t involve [physical] activity.”

With a hiatal hernia (a condition where the stomach pushes through the diaphragm) and Barrett’s disease (an esophageal condition that affects many people with gastroesophageal reflux disease or GERD), Werley has visited physicians regularly since his 30s. Recently, the pain got so bad that he knew he had to make a change. “No matter what foods I ate, the pain would be debilitating,” Werley says.

Over the past 11 weeks, Werley lived by his personal mantra originally coined by Henry Ford, “Whether you believe you can or you can’t, you’re right.” To date, Werley has lost 40 pounds and nearly reached his initial weight-loss goal. After so much success, Beman adjusted Werley’s weight-loss goal.

“He has been doing so well on the OPTIFAST program, that I don’t want to interrupt his progress with surgery,” Beman says. “Unless there is an emergency, we’re going to hold off on surgery and reassess in May.”

Since starting the OPTIFAST shakes, Werley’s GERD pain has virtually disappeared. “I’m actually worried about incorporating food into my diet,” he says. “I don’t know how that’s going to go.”

Though Werley’s health condition may make it a challenge to incorporate food, he knows the program has his back. Classes play an integral role in Change Your Weigh. In the beginning, Werley didn’t know what to expect from the classes, but now he fully trusts in the expertise and professionalism of the instructors. “When someone in my class brought up a personal issue, the instructor talked directly to her. It was like there was no one else in the room,” Werley says. “They get gold stars from me.”

Stay tuned as we post new articles tracking Gene Werley’s journey to health in the Early Werley Weighs In series. He’ll give us real feedback about his experiences with the Lehigh Valley OPTIFAST program.

Werley Weighs In: Phase One