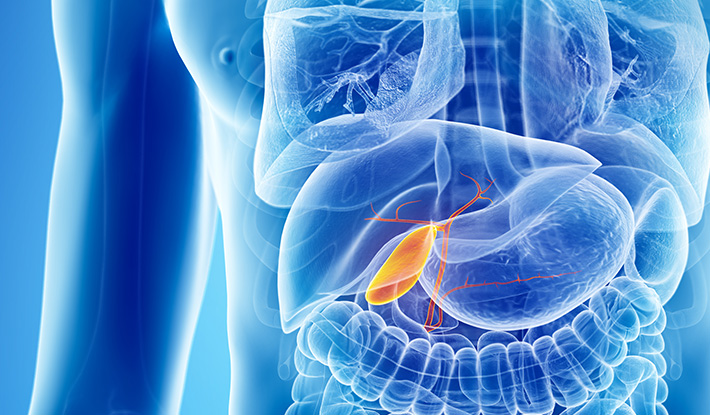 What That Pain Could Mean

During his residency to become a surgeon, Michael Mahoney, DO, woke one night with a stabbing pain under his right rib cage. As a doctor in training, he quickly zeroed in on his gallbladder.

“The pain dropped me to my knees and actually made me nauseous,” says Mahoney, now a Lehigh Valley Health Network (LVHN) general surgeon with LVPG Surgery–Health & Wellness Center at Hazelton. “I knew exactly what was wrong and went straight to the emergency room.”

An ultrasound revealed that a gallstone almost 1 inch around was blocking the bile duct leading from his gallbladder to his small intestine. Three weeks later, after two more painful attacks, Mahoney’s gallbladder was removed.

Today, he sees many patients with gallstones and other gallbladder diseases. “Cholecystectomy (gallbladder removal) is among the top three surgeries I perform,” Mahoney says.

Here’s a look at common gallbladder conditions, symptoms, and when surgery can help.

What is the gallbladder, and what can go wrong?

This 4-inch pear-shaped organ lies just beneath your liver on the right side of your abdomen. It stores bile made in your liver – a mixture of water, cholesterol, bile salts and other substances that help digest fats in food. After meals, muscles in the gallbladder squeeze bile into your small intestine, where food has traveled from your stomach.

Several diseases can affect the gallbladder’s ability to function, including:

“The classic symptom for most gallbladder problems is sharp pain in the upper right abdomen that radiates to the back and right shoulder,” says certified registered nurse practitioner Jennifer Yourey, CRNP, with LVPG Family Medicine—Hometown. “There may also be nausea, vomiting, fever and clay-colored stools.”

Risk is highest for women (especially during pregnancy), people over 40, obese individuals, those with high-fat, high-cholesterol diets, and after rapid weight loss (including from bariatric surgery).

If you have gallbladder problems but no symptoms, treatment is usually not necessary. “For mild symptoms, you may try living with them or switching to a low-fat diet,” Yourey says.

Unfortunately, even with lifestyle changes, symptoms often get progressively worse. “In those cases, the most effective treatment usually is surgery to remove the gallbladder,” Mahoney says. “The gallbladder isn’t essential for digestion because it’s mainly a storage tank.” Once removed, the bile duct compensates by moving bile directly from the liver to the small intestine.

Surgery is typically done laparoscopically using special tools and a camera inserted through four small incisions. Pain is minimal, and patients usually go home the same day and are back to work within a week or two.

Mahoney believes his experience with gallstones, though excruciating, has helped him better empathize with his own gallbladder patients. “I tell them, ‘I had that, and I understand,” he says. “It really does hurt.”

What That Pain Could Mean