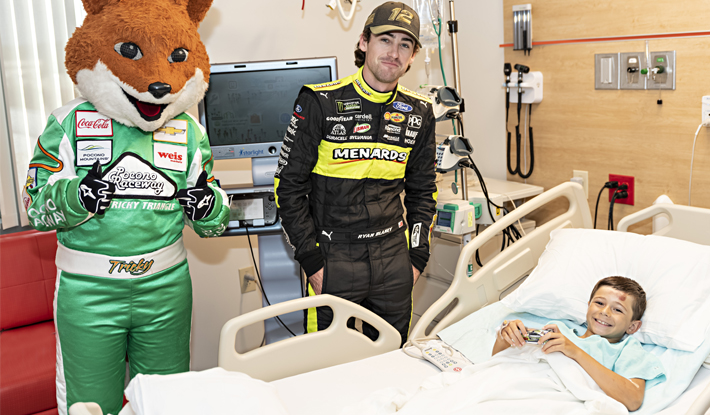 Blaney received a crash course in the services and education we provide for the geriatric community and their caregivers.

Born into a family built on love and racing, pursuing a career in the racing industry was a natural fit for Ryan Blaney. As a third-generation race car driver, Ryan is proud to continue the family tradition. With the number 10 tattooed over his heart, he is reminded of his late grandfather, Lou Blaney, who he strives to be like every day.

“It was his number for his whole career. He never changed his number,” Blaney said.

After losing his grandfather to Alzheimer’s, Ryan made it his mission to honor him by raising awareness about the disease. The 25-year-old formed the Ryan Blaney Family Foundation in 2018, an organization that supports causes that have directly impacted the family.

In May, his foundation launched a new program “Race to Raise Alzheimer’s Awareness.” 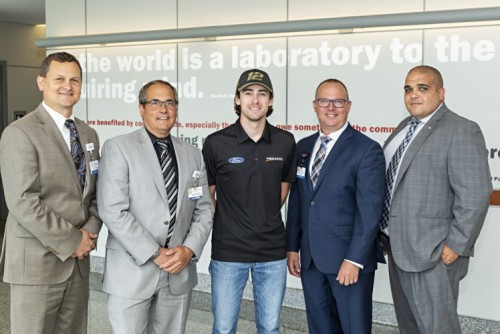 Off the track, you can find Blaney using his platform to encourage others to share personal stories about loved ones who have been affected by the disease.

“Family is, I think, the best thing you can have,” Blaney said.

In light of a cause close to his heart, Blaney recently visited the Lehigh Valley Health Network to tour the Fleming Memory Center. The mission of the Center is to provide compassionate care, dedicated support and focused education to those in our community who are facing challenges associated with Dementia and the caregiving process.

Following the tour, Kathleen “Trinka” Arnold, the daughter of Richard (Dick) and Peggy Fleming, shared the story of how the Center came to be.

Trinka’s mother started showing signs of memory loss and confused behavior in her late 70s. She was diagnosed with Alzheimer’s disease in 2002. After her passing in 2008, Trinka said her father often wondered how others cope who have loved ones afflicted by the disease. The Fleming’s were fortunate to have resources available to them, so they wanted to give back.

“He really felt that something needed to be done to help people, and so he approached people he knew who worked at Lehigh Valley Hospital,” Arnold said. “The ultimate outcome was the Fleming Memory Center, and we are happy that it’s here to help other people through what is a very difficult journey with the idea being that we don’t want it to be any more difficult than what it needs to be.”

Blaney also learned about the Center’s programs and initiatives designed to support elderly patients and caregivers walking through Alzheimer’s disease.

“Because of Ryan’s popularity and having the opportunity to host him at the Fleming Center, we were able to reach so many more people. Our common goal was to increase awareness for Alzheimer’s disease through the Ryan Blaney Family Foundation and inform the public of resources available in our community such as the Fleming Center and our support team,” said Cara Scheetz, director of The Fleming Memory Center.

Approximately 5.8 million Americans are living with Alzheimer’s. That’s why the race to increase awareness and find a cure continues.